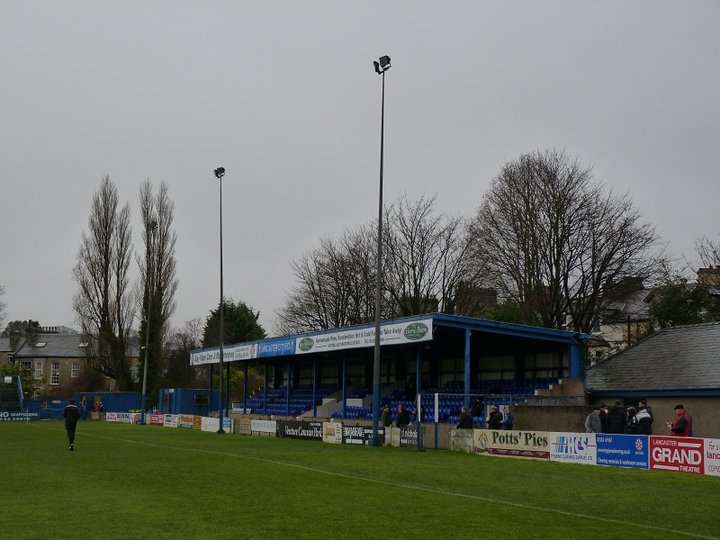 There could be a new team at the top of the BetVictor Northern Premier Division table this weekend, with current table toppers South Shields in FA Trophy action.

Just behind them in second place, a victory for Lancaster City could see them overtake the Mariners as they host Stalybridge Celtic.

The Dolly Blues had the chance last weekend but once again missed out as they were held to a 1-1 draw at Buxton.

Stalybridge themselves sit fifth in the table with 31 points, and recently defeated Whitby Town 2-1 thanks to goals from Chris Smalley and in-form Darius Osei, who has scored in the last three fixtures.

Elsewhere in the play-offs, Warrington Town host Basford United in a clash that will see fourth versus third respectively at Cantilever Park.

Paul Carden’s side recently returned home from Mariners Park with a point after a 1-1 result with South Shields, as Ben Garrity scored his 10th goal of the season.

Former Blackpool and Everton midfielder Jamie Milligan will take charge of his first Bamber Bridge game this weekend as they travel to Whitby Town.

Talking about his first week in charge, he said: “We had our first session on Tuesday, where I just explained everything I want from them and what I expect from them in training and in games.

“Obviously I know most of them because I’ve played with them, and a couple of them actually work for me as well.

“It will be tough to go between being a mate and a manager, but at the end of the day I’ve got a job to do and I’m not scared of upsetting people – it will be what it will be.”

Radcliffe’s six-game winning run came to an end against Stafford Rangers last weekend, and they will be looking to bounce back as they host Witton Albion.

Connor Thompson has expressed his delight at his time at Scarborough Athletic so far on loan from Gateshead. He told the Scarborough news: “It’s been great.

“The first couple of weeks it was a case of getting to know everyone and how they play, and obviously it was tough at first as the side were on a bad run.

“The new gaffer (Darren Kelly) has been great since coming in, he rang me and we had a good chat and he’s given me a lot of confidence to get in the final third and try to score some goals for the team.”

The Seadogs host Mickleover Sports at the Flamingo Land Stadium this weekend.

Following their victory over Radcliffe, their first home win of the season, Stafford Rangers travel to Ashton United, with new boss Michael Clegg in search of his first win since taking charge.

Hyde United host Gainsborough Trinity, while Nantwich Town will be hoping to bounce back from their 1-0 loss to Morpeth as they host Buxton.

Tunde Owolabi has now scored 19 goals so far this season as his side in FC United of Manchester sit seventh, and they will feature in the FA Trophy this weekend against Kettering Town.

 One in, two out at Morpeth Morpeth Town have confirmed the signing of Jack Robson, while Kris Thackray has joined Blyth Spartans on a one-month loan and Tom Potter joining Hebburn Town.