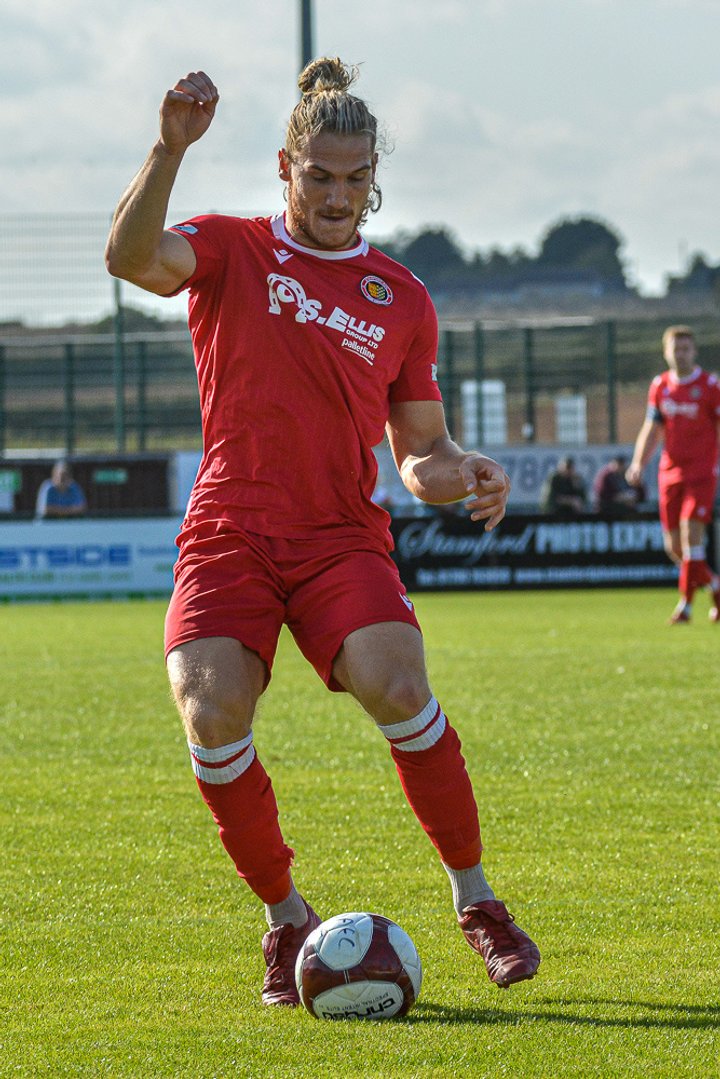 Hereford are among the most notorious cup giant-killers but Stamford star Rob Morgan is backing his side to give the Bulls a taste of their own medicine in Saturday’s FA Trophy fourth-round tie.

The Daniels, the only eighth-tier team left in the competition, are looking to claim their second National League North scalp having knocked out Kidderminster Harriers in December, with Morgan scoring the 18th-minute winner.

The midfielder and his teammates were only able to return to training last week having been granted ‘elite’ status due to their continued participation in the FA Trophy – and Stamford go into Saturday’s game knowing it could be the last time they kick a ball this season.

The Pitching In Northern Premier League remains on hold until at least March 6 – with discussions ongoing as to potential resolutions – but Morgan is confident his side can book further dates in the diary with a victory this weekend.

“Our preparation has been as good as it can be in the circumstances,” he said.

“It has been a strange, stop-start season and I don’t know what to do with my Saturdays sometimes. Football is a routine for so many people and it’s what keeps you going through the week.

“It was difficult in the spell after beating Kidderminster as we weren’t sure if we were able to train, so we were back to doing individual runs and exercises.

“But once we got the nod to train, we have been fully focused and we feel ready.

“We have such a good team this year and I think we are capable of playing at a higher level, as we showed by beating Kidderminster.

Hereford memorably stunned Newcastle United in the FA Cup third round back in 1971-72 but Stamford want them to be on the receiving end of an upset this weekend.

And there is no shortage of cup knowhow in Graham Drury’s squad. Goalkeeper Luke Steele played in Barnsley’s FA Cup wins over Liverpool and Chelsea in 2008 while 40-year-old midfielder Jon Challinor won the FA Trophy as a York City player in 2012.

“To have that experience around the group is brilliant,” Morgan added.

“For myself, this is the furthest I’ve been in the FA Trophy so I’m really enjoying it. Everyone loves a cup run and hopefully we can carry it on this weekend.”

The Daniels are among the 228 clubs being supported by Pitching In, a multi-million-pound grassroots sport investment programme launched by Ladbrokes – along with owner Entain – which includes a landmark partnership with the three Trident Leagues.

In addition to financial support, the initiative carries a particular emphasis on volunteering and community – and Morgan is delighted to be able to give the Stamford fans something to look forward to, albeit virtually.

“The Kidderminster game was brilliant but it would have been even more special with a crowd in – and we’d have had a big crowd this weekend,” he said.

“Fortunately, there is a live stream so the fans can get behind us from home – plenty of my family and friends watched the last round.

“No-one knows what is round the corner but we just have to hope that if we continue to progress in this competition, the fans can join us at some stage on that journey. That’s what it’s all about, especially in cup competitions.”

Ladbrokes, with the support of its owner Entain, has launched a multi-million pound investment programme, Pitching In, designed to support and promote grassroots sports. The programme includes a flagship partnership with The Isthmian, Northern Premier and Southern Leagues - collectively known as The Trident League, as well as a partnership with the UK sports charity SportsAid. For more details see: https://entaingroup.com/sustainability/pitching-in/

 NPL Show: January 15th From the fall out of last Sunday to the build up towards this weekend's FA Trophy with Ben.

Stamford last remaining NPL side in FA Trophy  Stamford AFC will face National League North side Hereford in the fourth round of the Buildbase FA Trophy on Saturday 16 January at the Zeeco Stadium.