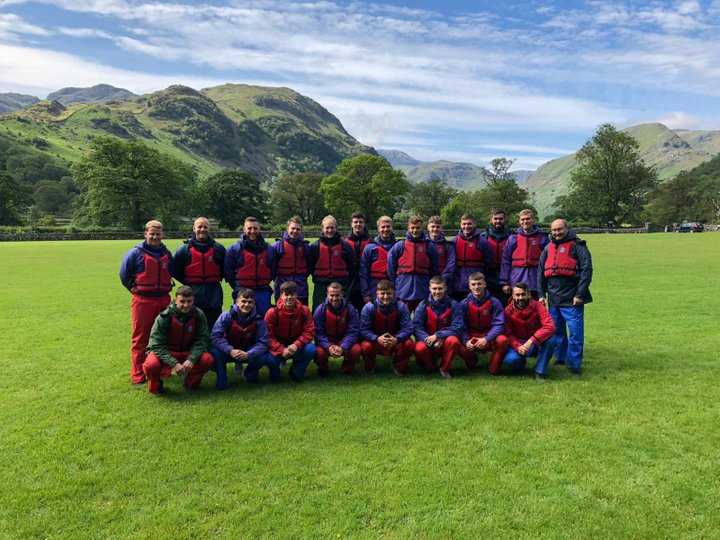 New Workington boss, Danny Grainger, has put together an innovative pre-season programme which included a physically demanding, but very rewarding, team building day in the heart of the Lake District.

And for the first time in their varied training sessions, there wasn’t a football in sight as they set up camp at the Glaramara Activity Centre in the Borrowdale Valley near Keswick.

The clue to what was about to happen came with the issue of special clothing for the morning session described as ‘Ghyll Scrambling’.

Basically, this meant hiking half way up a small mountain and taking a different route for the descent. This took the majority of the group out of their comfort zone as most had never taken part in a Ghyll Scramble before.

Completing numerous jumps, slides, belly-flops and team challenges, the players quickly developed a team spirit, togetherness and trust in each other as they made their way down the ghyll. With a few near misses, it was a relief to see all the boys make it to the foot of the fell safely and injury free.

After a light lunch, the lads apprehensively prepared for the afternoon session which, they were informed, would be more physical with water equipment exchanged for running shoes.
With players setting off at thirty second intervals, the brief was to run (yes run) from the valley up Honister Pass to the slate mine – a distance of 1.6 miles, not to mention the gruelling 20% gradient!

It was regarded as more of a mental challenge, yet physically demanding too, and pleasing to report that the entire squad recorded excellent times on their ascent.

Having got to that point, the next exercise was a series of 100 metre sprints on a ridiculously steep gradient above the mine. With the heart rate cranked up a few notches, the players then made their return to base camp.

It was an excellent day of team bonding in preparation for the new season and a rewarding time was had by all.

Manager Grainger said: “I think we all survived and are all still in one piece – just!”

 Flanagan back in the NPL John Flanagan is back in the BetVictor NPL as part of Dave Wild’s coaching staff at Mossley.

Rival club officials in charity sky dive  Two intrepid officials from friendly rival football clubs want to rise to the challenge of raising funds for charity - after volunteering to jump from a plane at 11,000 feet.