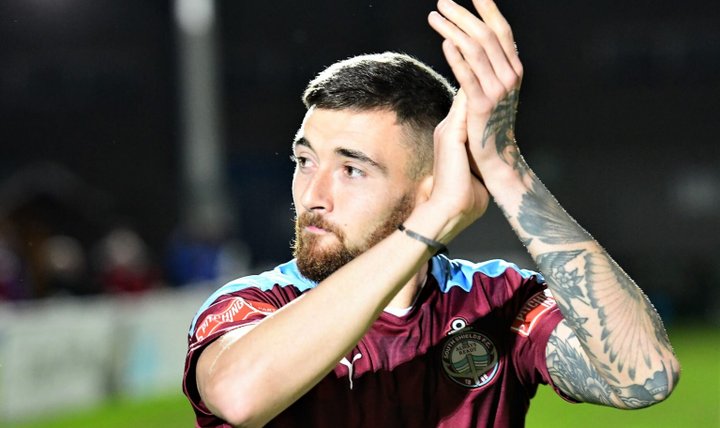 South Shields midfielder Callum Ross says he’s excited to be a part of a full-time environment at the club.

The Pitching In Northern Premier League Premier Division outfit announced that they will complete its transition to a full-time training model ahead of the 2021/22 season, having operated within a hybrid system for the last two years.

And Ross, alongside many other teammates, has bought into the plans, recently agreeing a new deal with the 1st Cloud Arena side.

He said: “I’m delighted to have signed on. It’s great that the club have offered me some security and obviously excited to stay in the north east and be a part of an ambitious club.

“I think the full time schedule will work better with the lads that were already full time with the club. Now the playing squad is completely full time and we’re excited and obviously have to back up the fantastic success the part time lads have delivered the club over the last few years.

“Now the players are completely focused on South Shields and there are no excuses not to perform.

“It’s very exciting plans moving forward and on and off the field is getting more and more professional day by day. It’s now down to the management staff and us as players to deliver for the owners and fans and get us to where we want to be.”

Graham Fenton’s side sat sixth in the 2020/21 Premier Division table before the season was curtailed, and sat top in the 2019/20 campaign before the pandemic struck.

They missed out on promotion the previous season, losing to Warrington Town in the semi-finals of the play-offs, but promotion still remains the key objective says Ross.

He said: “Absolutely, and by no means am I being disrespectful to other clubs in the division when we say this, but I’m sure all the clubs around us have known it’s been our number one target to get out of the division for the past couple of seasons.

“Obviously covid has gotten in the way along with the premature ending of the seasons, but yes promotion has to be our primary target again this season. An FA Cup run like last season would be fantastic for the players, club and for the fans to be able to watch the games, but the league is our target and we want to win it.”

 Newcastle Town take inspiration from Marcus Rashford Newcastle Town are one of the first clubs to receive funding from the new Trident Community Foundation.