After scoring in the opening game of their record-breaking run to the third round proper of the FA Youth Cup, teenager Rhys Dolan has completed a dream move from EVO-STIK Northern Premier League Ilkeston FC to League One Barnsley.

A product of the Premier Division club's renowned academy, the 17-year-old was snapped up by the Tykes for an undisclosed fee on Monday, three months after signing his first professional contract at the New Manor Ground in September and making his first team debut a month later in a 2-1 win over Grantham Town.

Dolan, pictured in action and signing for the Tykes, was also said to be on the radar of Burnley and the Premier League's Leicester City and Swansea City. In stepping up, he follows in the recent footsteps of Che Adams, Ashley Hunter, Kieron Wallace and Akil Wright in moving to a Football League club.

Mainly used as an attacking left-back, Dolan came to prominence this season for Steve Welsh's history-making teenagers who gave Newcastle United a real scare at the New Manor Ground after knocking out Shrewsbury and Burton Albion in the first and second rounds respectively. Trailing 3-0 at half-time, they fought back with two quick goals to set up a grandstand finish against the Magpies in front of 927 fans. 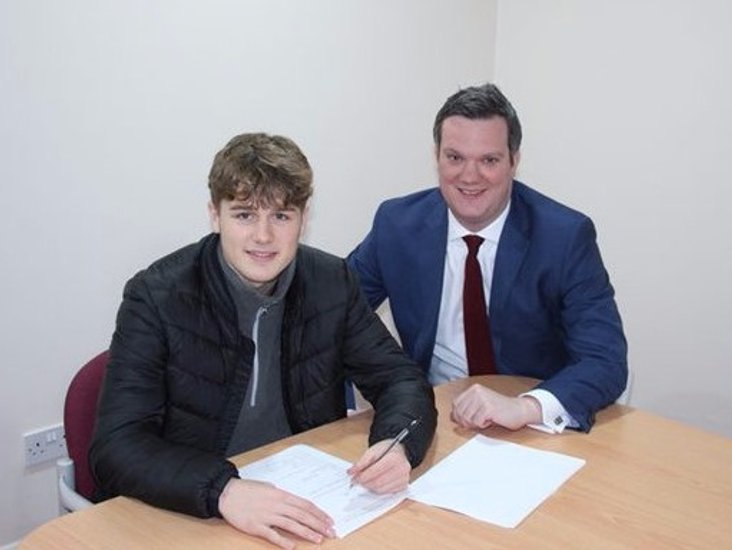 Before their exit, Dolan played in every qualifying match and the first three rounds proper against their Football League opponents. As well as scoring in a 5-0 victory over Loughborough Dynamo back in September to kick off the magical run, Dolan helped the Robins to another 5-0 win over St Andrews and a 4-1 victory over Studley in the final qualifying round.

Dolan said: "I'm delighted to sign for the Barnsley. It's a very exciting opportunity and I can't wait to get going. I'd like to thank everyone at Ilkeston who have helped me to where I am so far. I will miss the club and all the players hugely."

 Skipper answers community call After winning both their festive fixtures to climb into contention for the play-offs, the staff and players at EVO-STIK Northern Premier League Kidsgrove Athletic are heading into 2016 on a high and looking to boost their community links.