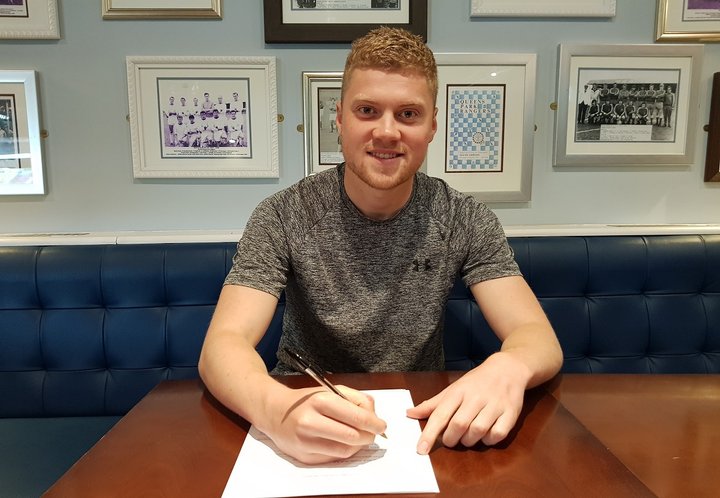 South Shields' cademy graduate Will Jenkins has extended his stay with the club after signing a new two-year deal.

The midfielder first joined South Shields as a 16-year-old in 2018 and has made 43 appearances for the first-team since making his senior debut in October 2019.

Jenkins scored with a stunning lob from distance against Radcliffe to mark his first league start for the club in style that same season, and has since developed into an important member of the first-team squad.

Having recently turned 20, Jenkins is targeting further progress as he bids to establish himself as a regular starter in claret and blue.

He said: “I’m delighted to be staying here for at least another couple of years and now I’m aiming to kick on personally, and help the team achieve its goal of promotion.

“I’ve been here for a long time and love playing for this club, so the motivation is high to put the way last season ended right, on both a club and personal level.

“I feel that myself and the club have both grown massively over the last few years, and the aim is for that to continue.

“I’ve just turned 20 so I’ve got plenty of time to develop, but I want to hit the ground running next season and keep improving as much as I can.”

Jenkins enjoyed several high points during his time in the Mariners’ Academy, including playing an integral role in the Under-18s’ remarkable and historic run to the third round of the FA Youth Cup in 2019-20, where they faced Fulham.

He was also part of the team which won the Academy’s first piece of national silverware in 2018-19 as Shields overcame Basford United on penalties at Walsall FC’s Bescot Stadium.

With the likes of Jenkins and close friend Sam Hodgson having since progressed from the Academy to the first-team set-up, the midfielder is hoping to act as inspiration for the club’s present and future emerging talents.

He added: “The pathway at the club for Academy players is quite clear and it shows that you’ll get chances if you prove you’re good enough.

“Myself and Sam have both benefitted from that and I’m sure there will be lots more players who come through in the years ahead.

“Having Sam alongside me over the last few years has been a huge benefit to me because we’ve been able to share it together and lean on each other whenever we’ve needed to.”

South Shields manager Kevin Phillips said: “We’re delighted that Will has committed his future to the club for at least the next two seasons.

“Will is an exciting young player who we believe has a bright future ahead of him.

“His success in establishing himself as part of the first-team squad again shows the pathway which has been created at this club for young players who work hard and show the right attitude.

“Will has shown that in abundance and we look forward to continuing to nurture his talent moving forwards.”