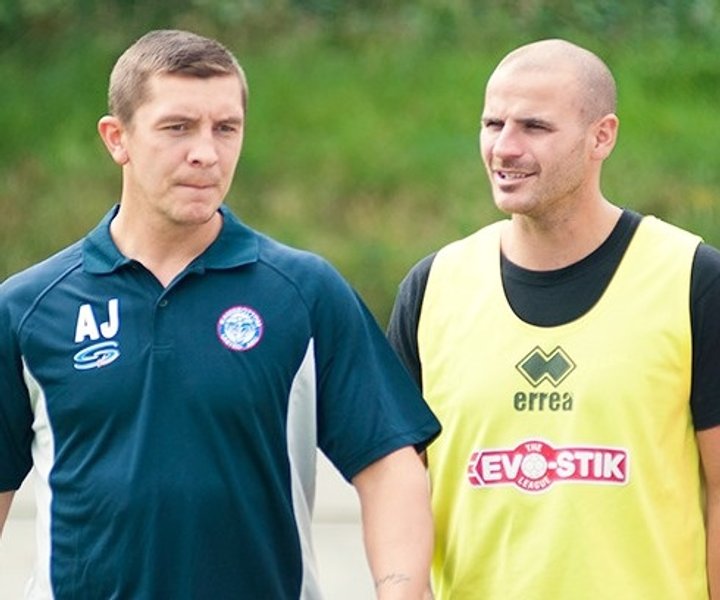 Anthony Johnson and Bernard Morley were confirmed as the new managers of Salford City on Saturday evening, a day after their departure from EVO-STIK Northern Premier League Ramsbottom United.

Johnson and Morley, pictured, took the helm at Moor Lane after the First Division North's Ammies parted company with Phil Power and his assistant Dave Chadwick on Friday.

Before their appointment was announced, one of the club's co-owners Phil Neville and coach Mick Priestley took temporary charge on Saturday, guiding Salford to a 2-1 home win over Kendal Town.

Former Macclesfield Town forward and FA Trophy winner Power, 47, departed after 18 months at the helm, paying the price for just four wins in the club's last 11 outings after the Ammies led the table earlier in the campaign.

In the statement unveiling the club's new joint management team, officials said they would be assisted by Glen Moses in the same role he held at the Harry Williams Stadium before also stepping down on Friday.

Johnson and Morley were in their sixth season at the Rams, having taken over the reins in the North West Counties League. Last season, the duo guided the Rams to their second promotion in three years to reach the EVO-STIK NPL's top flight, the highest level in the club's history.

Salford City chairman Karen Baird said: "This is a great appointment for the club, the new managerial team have a wealth of experience and we are excited to have them on board. It was important for the club to act swiftly and we are happy that they agreed on a move to Moor Lane without hesitation. I am sure the players and fans will give them a warm welcome."

In an earlier statement announcing Power's departure, officials paid tribute to the former FC United of Manchester assistant manager who led the club to a 12th place finish in his first season in charge.

"The committee and owners would like to thank Phil for all his hard work and commitment and wish him all the best for the future," said the club.