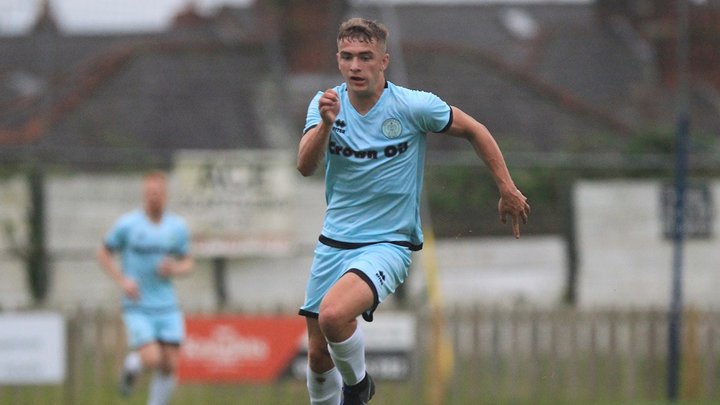 Youngster Keaton Mulvey is hoping to gain as much first team experience as possible during his loan with the Northern Premier League N/West side Mossley.

The 18-year-old joins the club on loan from Rochdale, where he recently signed an 18-month professional contract following a successful trial.

Mulvey could feature in the club's FA Cup preliminary round fixture against St Helens Town this weekend, and says he is excited for the new challenge ahead.

"I’m looking forward to it and I can’t wait to get underway in the FA Cup and the league," he said.

"I can’t wait to play in the league. I’m looking forward to gaining experience in men’s football. The league is very competitive and I think we have a strong squad, so it should be a good test for not just me personally but the team as a whole."

The striker has previously featured in the Pitching In Northern Premier League with Runcorn Linnets on a short loan, and has already played in a handful of games for his new club in the Lilywhites, including a start in the club's friendly against Fleetwood.

"All the lads have helped me settle in quickly and there seems to be a real togetherness within the squad,” said Mulvey.

"I know a few of the lads from playing against them last season and Liam Lovell, our goalkeeper is a good mate of mine from when we were at Curzon Ashton together.

"As always, a goal of mine will be to help the team in any way I can, whether that’s scoring myself or assisting my teammates, but first I have to ensure I’m starting week in week out by working hard in training and showing the coaching staff what I can do.

"It’s all about gaining experience and playing first team football at a good level, and that can only help me in my career and hopefully when I do go back to Rochdale I will have improved and be in a much better position to challenge for a place in the team."