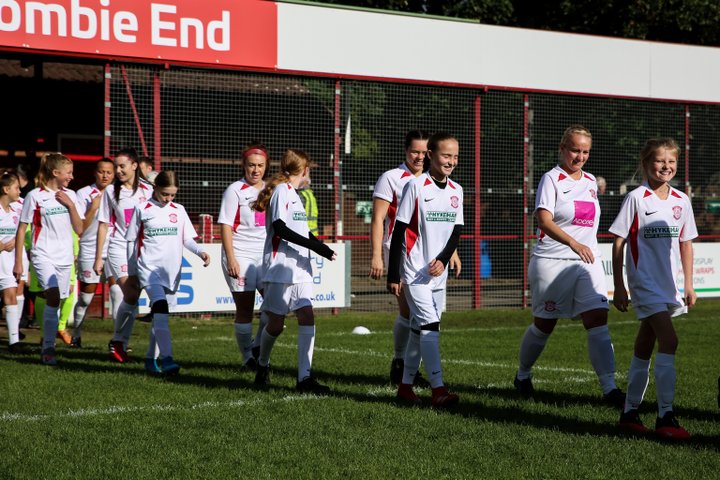 Lincoln United hope a valuable funding boost will enable them to provide 'successful and sustainable' football for an ever-expanding number of women and girls.

The Amateurs are among the first recipients of a grant from the Trident Community Foundation, which was launched in December as part of Pitching In’s landmark grassroots sport investment programme.

Since merging with Hykeham Town last year, United have incorporated a senior women’s team along with six junior female sides and Griffin hopes to see these numbers increase when action resumes to extend their community ties.

“We are huge advocates for the women’s game and we hold our men’s and women’s teams in the same esteem,” he said.

“We would like to create a recreational session for mums, with a focus on enjoyment, as well as a development squad for our women’s team and investing in our wildcat centre for girls between five and 10 years old.

“Historically, Lincoln United’s links to the community have not been strong enough and growing our female pathway will really broaden our reach.”

United are one of six Pitching In Northern Premier League clubs to benefit from the first allocation of TCF grants, which range from £1,000 to £4,000 and will be used to fund new or existing community-focused schemes.

Griffin also hopes to begin disability football projects at the club and thinks the cash injection will help United play a vital role in bringing people together after lockdown.

“Unless you’re at the top of the game, funding is difficult to come by,” he said.

“This grant will give us a real platform to be successful and, more importantly, sustainable with our delivery of football for women, girls and disabled footballers.”

The TCF grants come as a timely morale boost for the 27 clubs who have been offered them across the three Trident Leagues in the wake of a second consecutive campaign being curtailed – with more to come from the earmarked £150,000 fund donated by Ladbrokes’ owner, Entain, this season.

“Through forces beyond our control, one of the tasks facing every club in non-league football is to re-establish themselves in their local community,” said Pitching In Northern Premier League chairman Mark Harris, who sits on the TCF board alongside his counterparts from the Southern and Isthmian leagues, two Ladbrokes representatives and Non-League Paper editor-in-chief David Emery.

“We have to collectively remind our communities of the important role non-league football plays, and what better way to do that than through community-facing activities.”

Pitching In ambassador Stuart Pearce added: “These clubs will have a vital role to play in the health and wellbeing of society when restrictions ease.

“Initiatives like this will show the true meaning of Pitching In and strengthen existing bonds within communities across the country.”

The other Pitching In Northern Premier League clubs to have been offered grants at this stage are Newcastle Town, Marine, Workington, Scarborough and Pontefract Collieries.

Ladbrokes, with the support of its owner Entain, has launched a multi-million pound investment programme, Pitching In, designed to support and promote grassroots sports. The programme includes a flagship partnership with The Isthmian, Northern Premier and Southern Leagues - collectively known as The Trident League, as well as a partnership with the UK sports charity SportsAid. For more details see: https://entaingroup.com/sustainability/pitching-in/

Neal Bishop announces departure from Scarborough Athletic  The veteran midfielder has announced his departure from the Pitching In Northern Premier League Premier Division club on social media this week.