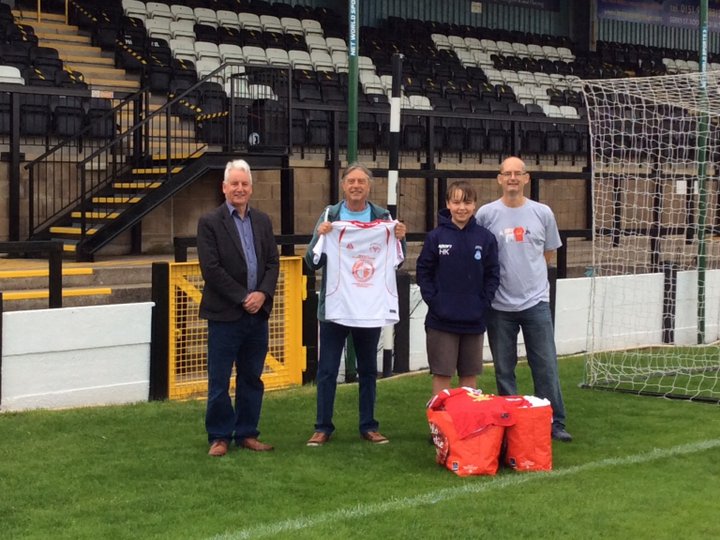 Marine has passed the remarkable milestone of 20,000 items of kit collected for charity KitAid.

For nine years Barry has been collecting unwanted items of football kits from schools, charities, church groups and families across Sefton for KitAid, a registered charity that helps underprivileged children and adults in over 30 countries across the world.

Marine Chairman Paul Leary said: “This is an incredible achievement for Marine Football Club and especially for Barry. To collect 20,000 items in just nine years has been an amazing journey for him and I am delighted that he has achieved such a milestone. As author of the 125 anniversary book, the history of Marine, published towards the end of 2019 and now achieving this record breaking number of kits for the charity KitAid todays presentation culminates in a fantastic year for him and he is well deserved of the accolades that will undoubtedly follow.”

In 2012 Barry had collected 5,000 items and in 2014 that figure was doubled to 10,000. BBC Radio Merseyside throughout the period has been a staunch supporter of the club’s KitAid campaign in appealing on behalf of Barry for unwanted kit to be donated.

Founder of KitAid Derrik Williams MBE said: “We are incredibly grateful to Barry for his total dedication in collecting such an enormous amount of kit for us. This is by far the largest donation from a single person and it is a staggering amount. Barry has provided enough kit for 1,300 teams to play football across Africa and the developing world. He has made a difference to thousands of people who would otherwise not be able to play in proper kit and boots. The joy and smiles he will have brought to many players is truly heartwarming.

“We would also like to thank Marine for supporting Barry from the very start of the campaign, along with the many thousands of people across Merseyside who have donated kit to him.

“Barry Lenton is a legend in non-league football and now a legend in many parts of Africa. Thank you Barry."

Barry added: “When I started collecting, my aim was to hand over 1,000 items of kit to KitAid and then move on to the next project but I continued to sort and count every item - every shirt, shorts, pairs of socks and boots and even referees’ kits, training bibs and footballs. It’s been hard work but very rewarding and I’ve made a lot of new friends along the way. It helped that I got on so well with Derrick Williams and his organisational skills and enthusiasm inspired me. I have to give a mention KitAid ambassadors, Vin O’Brien and Janet Neville, who have helped me with advice, collection and distribution. KitAid isn’t just a charity, it’s a family of which I am proud to be a member.”

 In Depth With: Lewis Salmon In this latest feature, the Northern Premier League sits down with some of the latest signings that will feature in the league in the upcoming campaign. This week, we spoke with Stalybridge Celtic loan signing, Lewis Salmon.