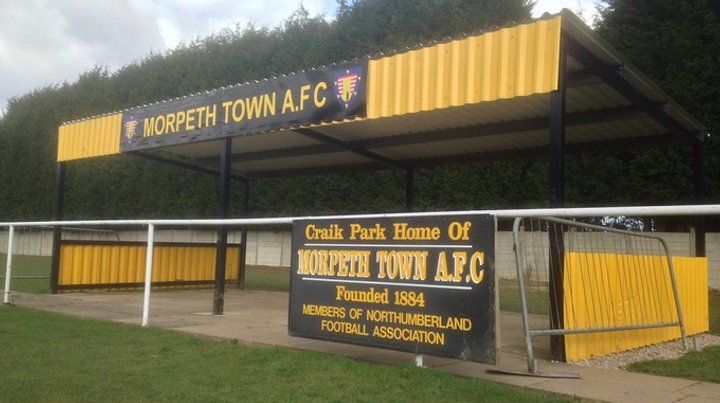 Absence makes the heart grow fonder – and that certainly seems the case for Morpeth Town’s fanbase as they eagerly await the chance to return to the sidelines.

The Highwaymen were FA Vase winners in 2016 and have continued on the road to success since, earning back-to-back promotions and establishing themselves at Northern Premier League Premier Division level last season.

Attendances have risen consistently at Craik Park as a result – the club averaged 645 last season, with more than 1,700 turning out for February’s clash against South Shields.

And Morpeth chairman Ken Beattie is hopeful that theme will continue when competitive football returns.

“It’s all about creating the right ambience – once people enjoy it, they’ll come back again,” Beattie said.

“We’ve had lots of e-mails and texts from our fans throughout the last few months – ‘when’s it starting?’, ‘when are the fixtures out?’.

“We are very pleased with the interest and passion of our fanbase and I think times like this really make you value your local football club.”

The pre-season excitement has been heightened by a couple of exciting new signings and impressive friendly performances.

“We have been playing really nice possession football in our games so far and we have a lot of good footballers in our side, so we are really confident going into the new season.”

Though Morpeth have been riding the crest of a wave on the field in recent years, lockdown has had an inevitable impact off it.

“It has been difficult, of course,” Beattie said.

“We’ve had quite a few weddings and functions cancelled and, though most have been re-booked for next year, we obviously don’t know what things will look like by then.”

Plans to install an artificial playing surface have also had to be pushed back to next summer as the club deal with the financial impact of Covid-19.

Their efforts to do so will be aided by the Pitching In initiative, a flagship partnership between GVC Holdings and the Northern Premier, Isthmian and Southern Leagues, collectively known as the Trident Leagues to help its 228 member clubs deal with the consequences of lockdown and beyond.

And in addition to financial support, a key focus of the partnership will be to facilitate and encourage community volunteers to do some pitching in of their own, and contribute their time and effort.

“A sponsorship like this is gratefully received at what are difficult times for everyone,” Beattie said.

“It is all volunteers who keep this club going. Without them we’d be stuck.

“We are pushing all the time and asking for more people to come on board, especially ahead of our first game [at home to Grantham Town on September 19].”

With a return to action now on the horizon, The Highwaymen will hope to enjoy more memorable days like May 22, 2016 – a date forever etched in Morpeth folklore.

In front of 46,781 fans at Wembley, the Northumberland outfit beat highly-fancied Hereford 4-1 and returned to a heroes’ welcome.

“I’m biased but I think it was the best Vase final ever,” Beattie said.

“I’ve been to quite a lot of Vase finals and the atmosphere was unlike any other I’d seen. It was phenomenal.

“Being underdogs, we did the town proud and to this day people refer to it because it was such a magic time.

“The town were waiting for us when we came back – we had 25,000 people on the streets of Morpeth. For a small town like this, it was fabulous.”

Volunteers vital for Radcliffe, says club chairman  Radcliffe chairman Paul Hilton says his club would never exist without volunteers – and hopes they can get a taste of the lofty football league heights.