NGA for 'Fan of the Year' Barry 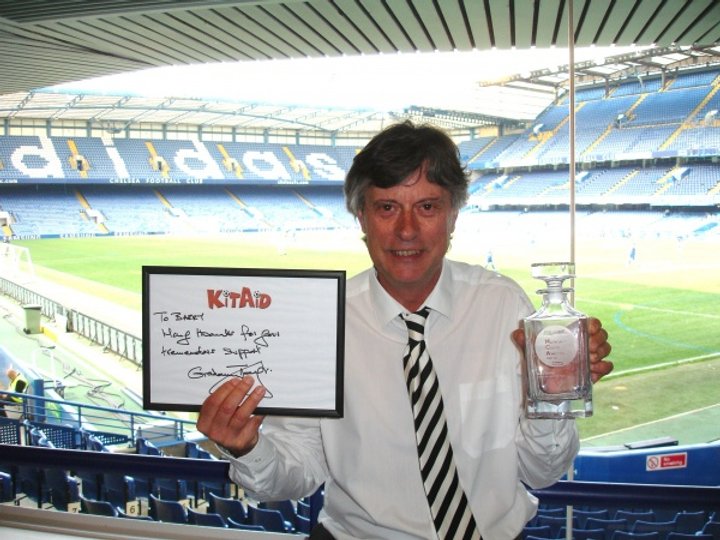 Marine AFC community officer and lifelong supporter Barry Lenton has been awarded the William Hill Fan of the Year, a national award presented by the Non-League Paper.

The presentation to him of an engraved glass trophy was one of 14 awards made at the National Game Awards at Chelsea’s Stamford Bridge on Wednesday, May 23rd.

Barry, a retired school teacher, has supported Marine since 1963 and now represents Marine as their community officer working with local schools, charities and community groups across the area. He was instrumental in Marine being awarded the Community Football Club of the Year in 2009 and 2010 as well as runners up in 2012 at the same Non-League Paper national awards.

Barry was also presented with a certificate of commendation signed by former England manager, Graham Taylor, for his work with Kit-Aid Founder Derrick Williams, who made the presentation and asked Marine to become the official ambassador for the charity following the collection by the club of over 6,000 items of football kit for underprivileged children and adults in over 30 countries across the world.

Marine Chairman Paul Leary said, “This is a fantastic and totally justified award for Barry. He has massive enthusiasm to help his football club and the local community and his efforts over the years have certainly made a difference. I congratulate Barry on receiving this national award and he, as I am, must be very proud of his achievements with the deserved recognition to have been voted the Non-League fan of the year, nationally.”

Lenton said, “This is the greatest accolade that any supporter of a Non-League club can receive. It is fantastic both for myself and the Marine family as, once again, our club has been put on the national map. To have received the award at Chelsea, home of the newly-crowned European Champions, was the icing on the cake. It was a unique experience to be honoured along with the elite of Non-League and the memories I have from the day will stay with me forever…. I think I might hire an open top bus!”