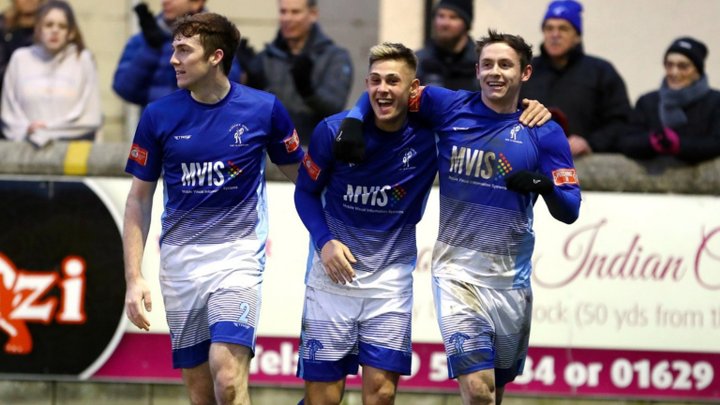 Goals from Alex Wiles and Reece Kendle were enough for the Gladiators to secure all three points, despite Paul Dawson pulling a goal back for the visitors with five minutes to go.

Their lead could soon be cut to just three points, however, with South Shields set to face Witton Albion on Tuesday night.

The Mariners will be in buoyant mood, having claimed a crucial 2-1 victory away at Warrington Town in Kevin Phillips’ first game in charge.

A fast start by the visitors proved to be the Yellows’ downfall, with quickfire goals from Dillon Morse and Cedric Main giving South Shields a 2-0 advantage with less than 20 minutes played.

Warrington right-back James Baillie capitalised on some sloppy goalkeeping to pull one back on 25 minutes, but the hosts, who had influential midfielder Jay Harris sent off for two bookable offences after the break, couldn't find an equaliser.

Elsewhere, Scarborough Athletic moved up to fourth with a 2-0 win at home to struggling Grantham Town.

First half goals from Jacob Day and Brad Plant were enough for the Seadogs to wrap up a comfortable win at the Flamingo Land Stadium, with their opponents still rooted to the foot of the table.

Buxton’s winless run extended to six games, but they still occupy the final play-off place, despite falling to a 3-0 defeat away at Morpeth Town.

The hosts, who are unbeaten in 15 matches in all competitions, produced a flurry of second half goals, with Liam Henderson and Liam Noble getting on the scoresheet before a Josh Granite own-goal in the 78th minute.

Whitby Town produced a dramatic late comeback to stay within touching distance of the top five.

Trailing 1-0 away at Hyde United, the Blues equalised from the penalty spot through Jake Hackett with four minutes of normal time remaining.

Bradley Fewster then completed the turnaround in second half stoppage time to wrap up a 2-1 win.

Elsewhere, FC United of Manchester recorded their fifth win in seven matches in front of almost 2,000 fans at Broadhurst Park.

Goals in either half from Ewan Bange and Paul Ennis put the hosts on their way, and not even a late consolation from Stalybridge Celtic’s Raul Correia could deny FC United maximum points and a 2-1 win.

At the Skuna Stadium, Atherton Collieries and Stafford Rangers played out a 1-1 draw.

Danny Lafferty put the home side ahead from the penalty spot before Ethan Stewart’s second half equaliser rescued a point for Boro’.

Basford United secured their first win since changing management as they edged Nantwich Town 1-0 at home.

A fine volley from Ryan Wilson shortly after half-time was enough to see the Lions climb up to 12th in the table.

And in the final game of the round, Callum Niven scored two minutes from time to give Mickleover a crucial 2-1 win over Witton Albion.

Having trailed at half-time, the relegation-threatened visitors equalised through Rob Hopley, only to see Niven fire a low drive beyond the reach of goalkeeper Greg Hall late into the contest.