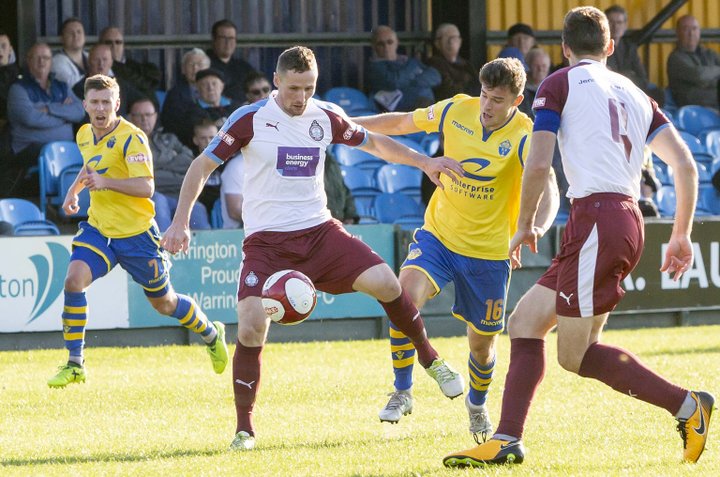 There’s plenty of close action this weekend including first versus third, sixth versus seventh and eighth versus ninth in a full round in the Premier Division.

Table toppers South Shields, who remain five points clear at the top of the division, host Lancaster City who are slowly catching the Mariners.

The North East side recently defeated Stalybridge Celtic 2-0 away from home in the FA Trophy, with quick fire first half doubles from Jason Gilchrist and Jon Shaw. However, the side have recently suffered news that forward David Foley has left the club due to work commitments, whilst Josh Gillies has been ruled out of action for a couple of months due to a hernia injury.

Joint-managers Lee Picton and Graham Fenton will be hoping that their side can have different luck on the field and extend their lead at the top.

Their opposition in the Dolly Blues will be hoping otherwise, heading into the fixture unbeaten in their last six league fixtures, including victories over Mickleover Sports, Matlock Town and WItton Albion.

“There’s no hiding from it – this is the biggest game of the season,” City manager Mark Fell told the Lancaster Guardian.

“I don’t think there is any pressure on us to be honest.

“It is a big game in the division and we can relish the fact that it’s a big game because of the position we are in and how well we have played this season.”

Elsewhere, it’s a battle of sixth and seventh as Matlock face Mickleover respectively. The Gladiators go into the round following a 2-1 victory over Carlton Town in the FA Trophy thanks to goals from a Jordan Sinnott penalty and another from Luke Hinsley, whilst Mickleover were knocked out of the cup after a 3-0 loss to Basford United.

Curtis Woodhouse enjoyed his first game in charge at Gainsborough Trinity with a strong 4-0 victory over Dunston in the FA Trophy, with the manager making the switch from Tadcaster Albion. The former footballer and boxer has also made his first two signings at the Holy Blues, signing Mitchell Dunne from Sheffield and Hull City prospect Billy Chadwick.

They will face FC United of Manchester, who have climbed up the table to fifth and three wins in their last four games in all competitions.

Second-placed Basford United will be looking to close the gap between them and South Shields as they travel to Skuna stadium to take on Atherton Collieries, whilst Morpeth Town take on Witton Albion in a mid-table clash.

Warrington Town take on Hyde United at Cantilever Park, with the hosts have only won two games at home all season and were recently knocked out of the FA Trophy by Ashton United 1-0.

Eighth-placed Whitby Town take Nantwich just a place below them, with the teams only separated by points difference.

At the bottom end of the table, Bamber Bridge host Stafford Rangers whilst Radcliffe face Staybridge Celtic at Stainton Park.

Grantham welcomed a new director in Dean Williams this week, and they will host Scarborough Athletic, who extended the loan signing of Dominic Roma from Basford United.

Finally, at the bottom end Buxton and Ashton United will be hoping for the three-points to club the table as they clash.