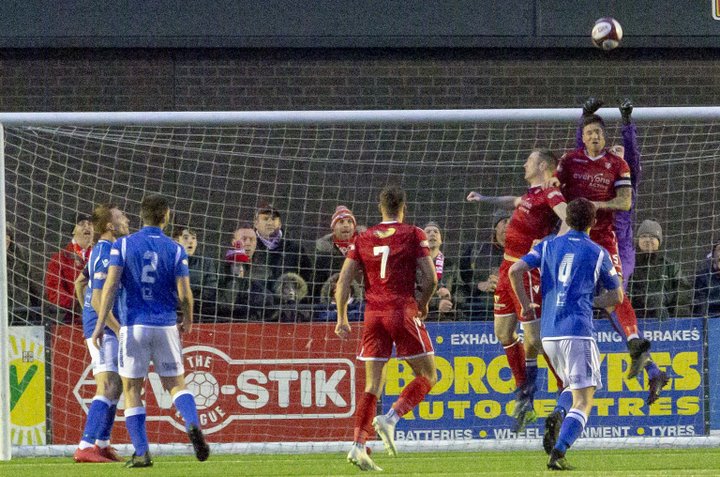 Just one point separates the top four in the EVO-STIK League Premier Division after the weekend’s games.

South Shields were the only winners, winning 3-0 at Basford United, to move up to second place, level on points with Farsley Celtic and Nantwich Town, and a point above Warrington Town.

After their embarrassment at home to Hyde United last week, Basford got off to the worst possible start as they trailed to David Foley’s second minute goal.

A 28th minute mix up between Saul Deeney and Stef GaInski at a South Shields free kick enabled centre back Dillon Morse to net from close in, and Gavin Cogdon added icing on the cake in stoppage time with a low drive.

Warrington Town’s nine-match unbeaten run came to an end as they were beaten 1-0 at Scarborough Athletic, who move within three points of the Yellows in the play-off places.

The Yellows failed to make the most of a host of first half chances and James Walshaw lobbed Tony McMillan with Scarborough’s first shot of the match on 51 minutes and that was enough to secure all three points.

Gainsborough Trinity kept in sight of the play-off places with a 4-1 win over struggling Workington.

Ashley Worsfold scored his 12th of the season to get them on the board on 19 minutes, and second half goals from Ben Gordon, Simon Russell and Worsfold’s second made the game well and truly safe before Jason Walker’s consolation, with Workington now 10 points adrift of safety.

Marine made it four wins from five as they shocked Buxton 3-0 to climb up to 17th place in the table.

Liam Hynes put them in front shortly before half time, and two goals in three minutes in the final quarter from Steve Irwin and Daniel Mitchley completed the job.

There were goals aplenty in Hyde United’s match once again this week, though this time they were on the other end of a thumping, losing 5-2 at Bamber Bridge.

Jordan Fagbola had put the Tigers in front after nine minutes, but they were blown away by Brig, for whom Paul Dawson scored a hat-trick.

Chris Marlow and Matthew Dudley also scored as Brig led 3-1 at half time, with Chib Chilaka scoring a consolation late on for the visitors.

Brad Carsley scored a stoppage time equaliser on his debut as Lancaster drew 2-2 with Mickleover Sports, a result which does little to ease either side’s relegation worries.

Durrell Berry scored at both ends, giving the Dolly Blues the lead with an own goal, but then putting Sports ahead 13 minutes after Pablo Mills had equalised.

Stalybridge Celtic bolstered their squad with a number of signings in the week, and they won 1-0 over Hednesford Town, Scott Bakkor with the only goal.

They are now just a point behind Matlock Town, who suffered a third successive defeat as they went down 1-0 at Witton Albion, their poor recent form threatening to undo all the good work they had done since the appointment of Dave Frecklington in climbing the table to within touching distance of the play-off places.

Saturday's transfer list - January 12  Player movements registered with the EVO-STIK League from Sunday 7 January to 11am on Saturday 12 January 2019.