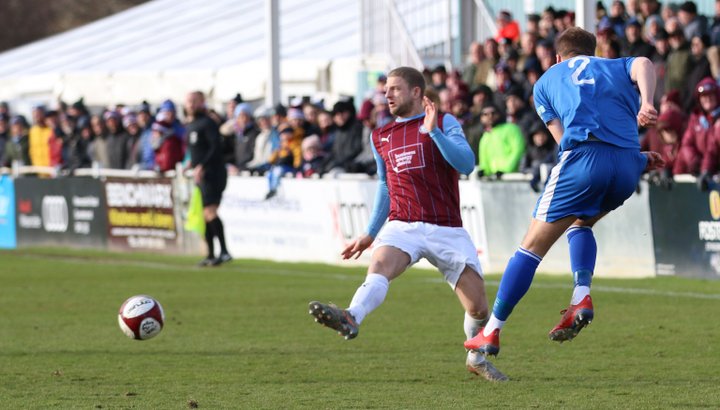 South Shields have extended their lead at the top of the BetVictor Northern Premier table following their 2-1 victory over Bamber Bridge.

The Brig took the lead just before half-time through Alistair Waddecar, but second half goals from Joshua Gillies and Jason Gilchrist saw Mariners claim a 2-1 victory.

“They had to dig in unbelievably deep to get the three points today because Bamber were excellent on the day.

“I have to give them credit. Particularly in the first half, they shifted us about. I thought they were the better team first half.

“We came in at half-time and we asked the lads for a bit more and that’s exactly what they gave us.

“They were tremendous. I thought the impact of the subs were top draw and that’s great for us. It’s difficult picking 11s and 16s at the moment because we have got a clean bit of health, but the contribution the subs made were excellent today.”

South Shields are now six points ahead of the top.

FC United of Manchester jumped to second place following their impressive 4-0 win over Mickleover Sports, with a hat-trick from Tunde Owolabi, the first coming inside two minutes, and Adam Dodd scoring the fourth.

Radcliffe claimed their first point in seven games, drawing 2-2 with fourth-placed Nantwich Town. Joshua Langley scored an own goal on 25 minutes to give Radcliffe a lead, before a Sean Cooke penalty equalised just after half-time. Striker Ricardo Fuller gave the Dabbers their first lead of the game just after the hour mark, before Darren McKnight levelled things up on 70 minutes.

Lancaster City have dropped to fifth place following their 1-0 defeat to Gainsborough Trinity, with Nicholas Walker’s goal on the 7th minute enough to separate the two sides.

At the foot of the table, Stafford Rangers claimed a vital three points with a 2-1 victory over Whitby Town. They are now seven points away from Matlock, who sit 19th.

The Blues took the lead inside 15 minutes through Kieron Weledji, before goals from Alex Harvey and Jake Charles saw Stafford claim their first league win in eight fixtures (January 25 against Scarborough Athletic).