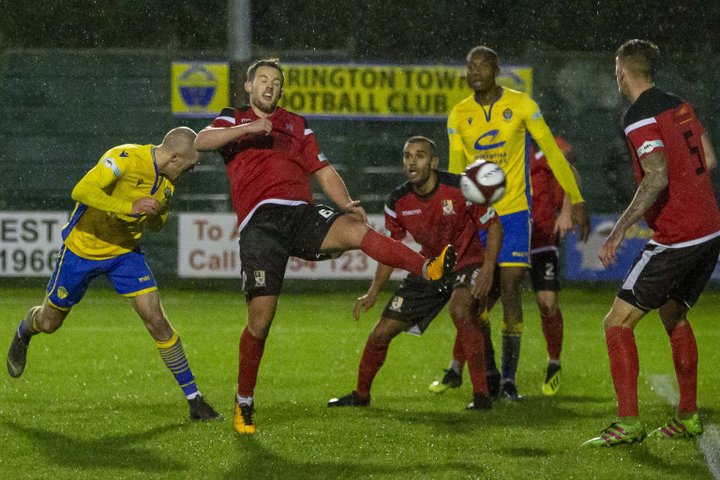 There were late goals in both games involving top five clubs in the BetVictor Northern Premier Division clubs at the weekend.

Lancaster City were denied the chance to go top of the table by Liam Tongue's injury time equaliser for Hyde United which secured the visitors a 2-2 draw at the Giant Axe.

The Dolly Blues had twice led through David Norris and Lewis Fensome.

With South Shields in FA Trophy action, Lancaster would have gone top with all three points, but will have to settle for a jump up to second with Basford United also out of league action.

Warrington Town consolidated fourth place with a come from behind win at home to Stafford Rangers.

Tony Gray's header two minutes from time completed a comeback for Paul Carden's side, who had trailed to Paul Bignot's header nine minutes in to the second half.

Ben Garrity scrambled home an equaliser on 71 minutes after Lewis King had fumbled Bohan Dixon's cross, for a win that gives the Yellows a six point cushion inside the play-off places.

Elsewhere, Bamber Bridge squandered a 2-0 half-time advantage to lose 3-2 at home to Stalybridge Celtic, the same result as the reverse fixture just a month ago.

James Dean struck twice to give Brig a 2-0 half-time lead which they held until Darius Osei pulled one back on 64 minutes.

Witton Albion moved within touching distance of the play-off places with a 4-1 win over Mickleover Sports.

The damage was done by two goals within a minute just before half-time, including a miracle strike by Will Jones from the halfway line.

That goal followed one from Billy Smart just seconds earlier, giving Witton a 3-0 half-time cushion that proved more than enough, despite Mason Warren's penalty two minutes in to the second half.

Scarborough's underwhelming start to the season continues as they were beaten 3-1 at Radcliffe.

Radcliffe are now 12th after winning five of their last six games in the league, with Liam Ellis getting them going after just four minutes.

James Walshaw equalised for the Seadogs before half time, but Kingsley Williams and Ben Wharton earned the hosts the three points.

 FA Trophy third round qualifying draw Reigning NPL champions Farsley Celtic will travel to Workington in the next round of the FA Trophy.