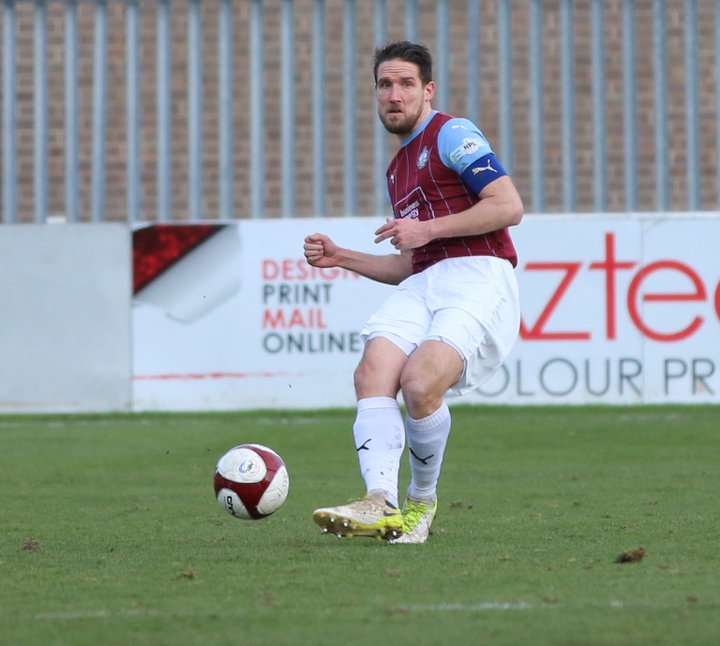 After 211 appearances, 27 goals, two promotions and five trophy lifts, Jon Shaw's time as a South Shields player has come to an end.

The defender’s playing contract has not been renewed ahead of the 2022-23 season, but he intends to extend his time on the pitch elsewhere.

Shaw will though remain a vital part of the club as he returns to his previous role as head of professional development, working with Academy players as they bid to progress into the first-team environment.

He will always be regarded as a Mariners legend for his exploits on the pitch, with his performances in his debut season helping the club to a historic quadruple and his considerable influence as vice-captain and later captain proving to be hugely significant in the years that followed.

Shaw: "I’ve had an unbelievable six years as a South Shields player.

“I came here to finish my career, with hopes of playing until I was 40, although realistically I thought I would probably retire at 34 or 35.

“I’m extremely grateful to Jon King for bringing me to the club alongside Lee Picton, to Lee and Graham Fenton for managing and coaching me for such a long period, and to my fellow players and everyone involved at the club, who are some of the best people I’ve known in my 22 years in the game.
“It has been a privilege to represent the club through all of my various roles and to have been part of some great successes, as well as a few little disappointments along the way.

“As it has been throughout my time here, the club is striving to move forward, and inevitably a few players have to move on.

“I understand the decision not to renew my playing contract. I can’t honestly say I agree with it, but that’s me backing myself which in this game you have to do, and I feel I have something to offer a team and want to play for as long as possible.

“I was offered the opportunity to remain as part of the first-team coaching staff, and I’m hugely grateful to Kevin Phillips for that offer and for the fact he wanted me as part of his staff, but my desire to continue playing has an affect on that and between myself and the club, we have decided I will return to my previous role with the Academy.

“I’m hugely excited to remain part of the club and to have such an important position with our Academy, where I’ll still be able to work with lots of the great people around the club who have become an extended part of my wife and boys’ family, and so many people who have played a massive part of my life and our good times at the club over the last six years.

“Day-to-day, I will be to represent this great club with pride alongside so many fantastic people, and I can’t wait to see what the future brings.

“I’m going to massively miss the buzz of 3pm on Saturdays and Tuesday nights under the lights at our ground for many reasons, but particularly because I’ll miss the supporters who have backed me every second since I’ve been here.

“It will be a strange experience to make that change at this stage of my career, but after 22 years of playing I think I owe it to myself to decide when to hang my boots up, and I don’t feel ready to do that yet.

“I wish everyone involved in South Shields’ first-team the very best of luck for next season and hope they right the wrongs of the last couple of years.
“I’ll be their biggest supporter.”

South Shields manager Kevin Phillips said: “Jon has been a fantastic servant to the club and is a credit to himself and the club.

“He has been exemplary, but unfortunately tough decisions have to be made in football and Jon understands that.
“Jon has made it very clear that he wants to continue playing and that’s something I completely support, because I played until I was 41 and you’re a long time retired when you stop.

“It was a tough one because I want to freshen up the squad and build my own team to challenge for promotion next season, and I couldn’t guarantee Jon the minutes he would be looking for.

“Jon continuing his playing career with another club unfortunately affects his role as assistant manager, but it goes without saying that he will always be welcome at the first-team training ground to help out, which is something we’ve spoken about.

“We wish him all the very best with whichever club he signs for but look forward to continuing to work with him at the club and to him being a big part of our future.”