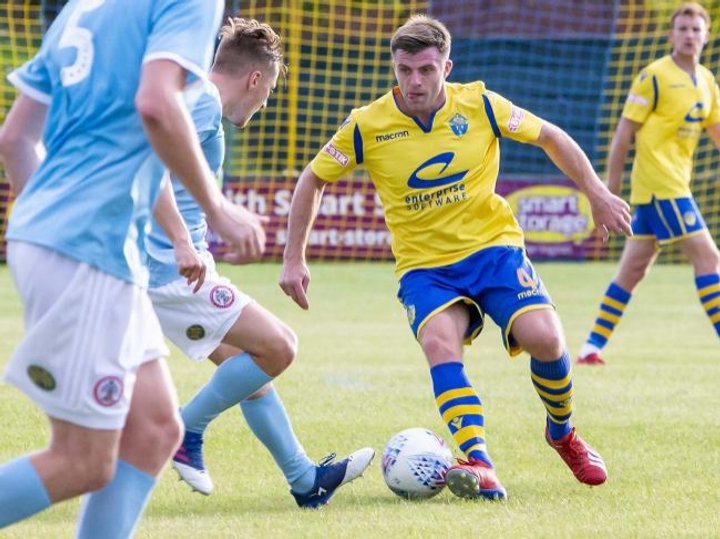 Warrington Town have announced that Steve Jennings has retired with immediate effect.

Jennings, 35, joined the Yellows in the summer from Barrow for his second spell, having previously played on loan at the club in 2017/18.

Manager Paul Carden paid tribute to the midfielder, who made 10 appearances this season.

He said: “It is desperately sad because of the career he’s had. He felt he wasn’t doing himself or the team justice and he didn’t want to be a hindrance to us.

“He’s took the decision to quit, which happens to everybody but you want to call time when you’re ready and not when your body fails.

“Unfortunately, he’s had ongoing issues and he’s come to the conclusion that he’s not doing himself or us any favours.

“He’s had a fantastic career, is a great lad and he’ll always be welcome here. He can look back and be very proud of the career he’s had.

“The door will always be open for him here. He’s doing his coaching badges now so he’s on the road to that. He’s a part of us – there’s no reason why he can’t come back and help in another capacity.”

Jennings turned professional at Tranmere, making his debut in 2002, and made more than 250 appearances in four spells.

His career took him north of the border to Motherwell in Scotland, playing in the Scottish Cup final defeat to Celtic in 2011.

He also played for Coventry, Port Vale and Southport.

 Alex Curran extends stay at FC United FC United of Manchester have announced that Alex Curran has extended his loan with the club from Stockport County.

N/West round-up: Rare slip up at the top  At the top of the table, Workington suffered just their third loss of the season as they fell 2-1 to Pontefract Collieries.