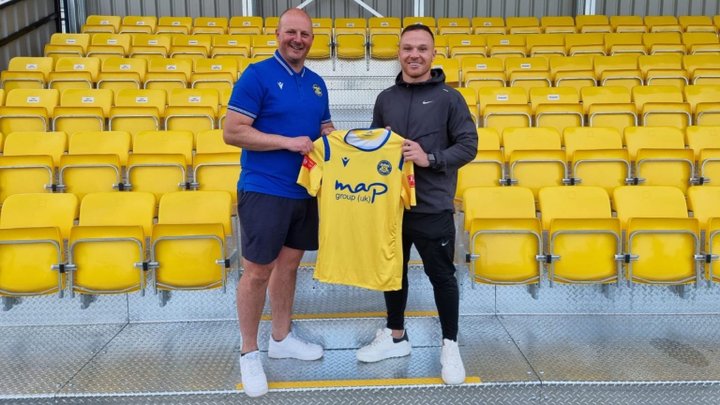 Stockton Town have announced the signing of striker Stephen Thompson from Spennymoor Town.

Thompson, 33, began his career at Middlesborough before departing the club for Port Vale in 2008.

After brief spells at Stafford Rangers, Telford United and Durham City, the striker joined Darlington in 2012.

Thompson enjoyed a fantastic eight year career at the Quakers, scoring over a century of goals which helped the club move from the Northern Premier League Division One North to the National League North.

He then joined Spennymoor Town in 2020 before moving to Marske United on loan.

On joining Stockton Town, Thompson said: “I’m delighted to sign for the club.

“The interest shown from Michael and the management team, and then meeting and speaking with them, they told me direction the club are going in.

“You just look at the set-up, how professional it is, and the way they play football, it was massive in the decision.”

“We want to go and win the league this season.

“That’s the number one aim for me, to build on from last season and finish top.

“Coming in, I know there’s a couple of young lads, so I’ll be looking to pass on my experience to them in any way I can.

“I’ve got a couple of promotions out of this league in my career, so I’ll be looking to get another one with Stockton Town.”

Anchor's boss Michael Dunwell is pleased with his new acquisition and feels that Thompson will bring plenty of goals to his team.

“It’s a really big signing for us,” Dunwell said. “The calibre of player that he is, he’s scored a number of goals at Darlington and Spennymoor Town.

“We’ve played against him a few times now, saw him over the years and know what he can do.

“He’s a very attack-minded player, and will bring goals to the team, which is what we were looking for. It’s a really big signing for us and one we feel will improve us massively.”

Hebburn make four new signings  Hebburn Town have made their first moves of the summer, bringing in three mainstays from Morpeth Town and a new goalkeeper.