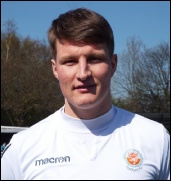 Egerton, 28, suffered a broken leg last summer and sat out the campaign through injury.

Baker said: “Sam is a natural born leader & was a candidate last season to be captain, prior to breaking his leg. He echoes me as a manager & is fully on board with the direction of the group! He is a really mentally strong character who will lead by example on & off the field.

“Matt Cooper did a fantastic job last season of being Captain & will ably assist Sam. It’s no slight on Matt - I just feel it’s better to have an outfield player as captain.”

Egerton said: “I am extremely proud to be captaining the club for the coming season; after a difficult first year at the club with injury, I’m grateful for the trust the Gaffer has put in me in offering me this role.

“We have an exciting group of players going into the new season with a good blend of youth & experience. I feel the mentality of the group that has been created by each individual will take us a long way this season.

“On behalf of the group, I’d like to thank the fans for their continued & unconditional support - it doesn’t go unnoticed.”

The club has also confirmed the return of Harry Sheridan, re-joining on a dual-registration deal with National League North side Altrincham.