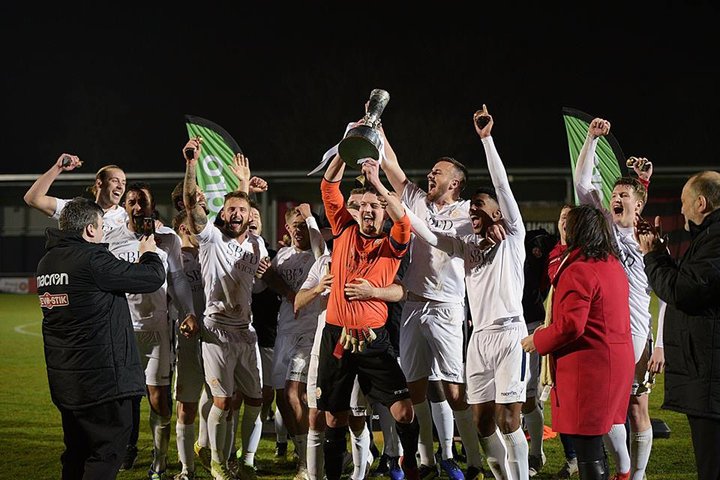 Trafford caused an upset to win the 2019 Integro Northern Premier League Cup with a 2-1 win over Farsley Celtic.

The EVO-STIK League West Division side held off a late onslaught from the Premier Division leaders to pull off a memorable victory and one of the finest nights in the club’s history.

The excellent Darius Palma struck a lovely winner seven minutes in to the second half after Chris Atkinson had cancelled out Adam Farrell’s first half opener.

Played at Broadhurst Park, the home of FC United, the game got off to a slow start as is often the case in finals, Trafford trying to play out from the back but struggling to get over half way against their higher league opponents.

It took the best part of 20 minutes for the first clear cut chance, Nathan Cartman’s ball from the right hand side was glanced right across goal and off the far post by Danny Ellis.

Trafford got their first look at the other end when space opened up for Declan Rydings through the middle off Adam Farrell’s flick on, his touch getting away from him and he was eventually snuffed out at the by-line.

Captain Matthew Cooper, who would become increasingly busy as the night wore on, made his first good save shortly before the half hour as Dave Syers’ well struck shot was pushed wide of his left hand post.

The vociferous Trafford support were sent in to delirium seven minutes before the break when Farrell finished well from a central position on the edge of the box to give them the lead.

It was almost short lived, Cartman bending a shot just over the bar minutes later, but Trafford would take their 1-0 lead in to half time.

Within three minutes of the restart, it had been cancelled out. Chris Atkinson struck a firm half volley from 25 yards that beat Cooper to his right hand side, and Farsley looked like they meant business at the start of the second half.

But Trafford didn’t roll over, and a bit of individual magic by Palma restored their advantage.

A stepover enabled him to weave through two defenders and in to the box, and from the left hand side he struck a well-hit shot across the ‘keeper and in to the far corner.

Farsley had work to do and though they dominated territory, they were struggling to break Trafford down.

Until at least the hour mark, Trafford were posing a threat on the counter attack too, Palma on a couple of occasions asking question marks, before Farrell squandered a glorious opportunity to make it a two goal cushion when he let his touch get away from him after getting in down the right.

The final quarter was played almost in its entirety in Trafford’s half but they stayed resolute.

Cooper pulled off a really good save to deny Syers, and Farsley chucked captain Ellis up front to add even more presence in the box.

As the game ticked in to injury time, Cooper again saved well, tipping over Atkinson’s effort from 12 yards and from the resulting corner, Sam Egerton and Keil O’Brien stood firm to twice deny Syers.

Trafford saw out the resulting corner and the referee blew his whistle to scenes of jubilation.

For Farsley, it was their second Integro League Cup final defeat in five years, and their attention now returns to the Premier Division title race at home to Hyde on Saturday.

 Runcorn Linnets pledge support for inspirational Alfie A 10-year-old footballer, who launched a mental health charity in memory of his dad, will be the guest of honour at Runcorn Linnets' Easter Monday local derby against Widnes.

Andrews to step down at doomed Reds  Lee Andrews will step down as Workington manager at the end of the season.