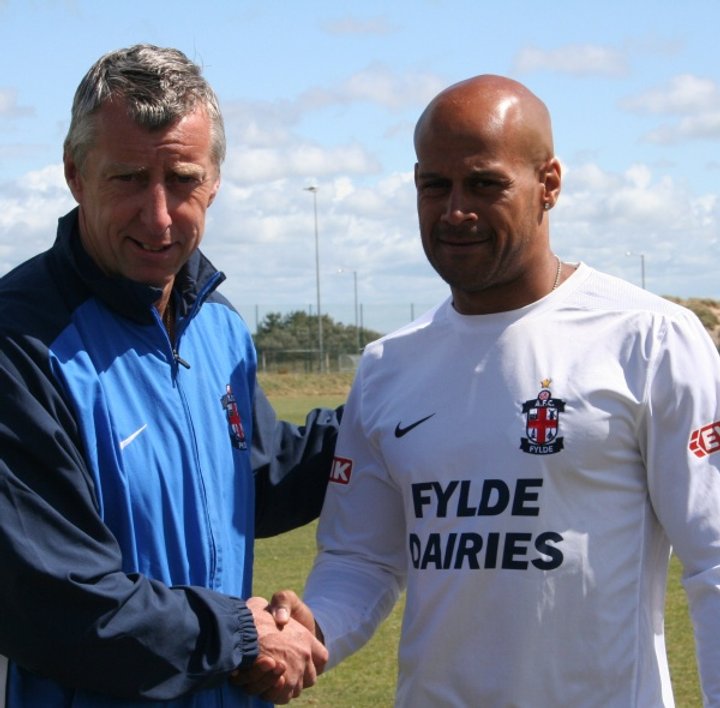 The experienced striker’s signature is regarded of something of a coup by the club with the forward agreeing a 1 year deal and dropping down 3 levels of the pyramid to join the Coasters. Thorpe has played over 400 games in the Football League and was a key member of Fleetwood Town’s bid for promotion to the Football League last season. He started his career at Blackpool and spells at Lincoln City, Swansea City, Torquay Utd, Brentford, Bristol Rovers and Rochdale followed. Now he is settled on the Fylde Coast after his move to Town last summer and he was keen to continue to play his football in the area and is delighted to join the club’s quest for success.

Kelham O’Hanlon delighted to bring someone of his pedigree into the club. “ I identified him at the back end of last season as a potential target but he was still very much part of Fleetwood’s plans. I have signed him to lead our line and Thorpey ticks all our boxes, he’s powerful, very good at bringing other players into play and he’s also unbelievably fit for his age.”

O’Hanlon was also quick to praise the player who could have played at a higher level after his time at neighbours Fleetwood in the Blue Square Premier came to an end this summer. “I’m sure he will be a big influence for the football club this season as we look to challenge for promotion this season. We have a number of exciting young players in the squad and Lee’s experience from his football league career will be invaluable. I’ve met Lee on a number of occasions of late and I have been very impressed with his enthusiasm and appetite for the game – the important thing is that he wanted to come to us which is fantastic for the club. He was a key player in Fleetwood Town’s squad last season and this summer after his release he had offers elsewhere. I’m delighted he’s opted to come, we spoke to him he really wanted to join AFC Fylde which is a great result for us. ”

Thorpe is pleased with the move and spoke of the club’s ambition and what he can offer. “I spoke to Kelham early on to see what his plans were for the club. I’ve been impressed with his vision and what the Chairman had to say about moving the club forward. I’m looking forward to it the club have some exciting plans and are looking to go one better after going so close to winning promotion last season. I feel fit and strong and now I’m a bit older I’ve turned into a target man so I will put myself about as that’s my style”.

Thorpe spoke highly of Fleetwood and sees similarities with his new club “I enjoyed it at Fleetwood last season but they had a squad that was very strong and I didn’t play as much as I would have liked but they are looking to win promotion and I want to play regularly. I’ve left on good terms with Micky and the Chairman there so I wish them well. Everybody was happy that I had done as much as I could in my time there but now it’s a new chapter for me and Fylde are like Fleetwood as they want to progress up the leagues. I hope my
experience will help the younger players when it comes to the big games and winning promotion which I’ve done many times in my career. Fylde have a good team and I’m looking forward to the season, it’s a new challenge and we want to win promotion this season. I was only playing league football a year ago and had opportunities to play higher up the pyramid but I’m happy on the Fylde Coast and looking forward to getting started and giving 100%.”

Thorpe will meet his new team mates for the first time when they start pre-season training next week, one face will be familiar with former Blackpool stalwart John Hills who he played with at Blackpool now Player Coach. He follows the signings of keeper Rick Whiteside from Evostik North Champions Chester and Lancaster City’s leading scorer Dave Swarbrick.

Fylde kick off their pre-season with a home game against Thorpe’s former club Fleetwood at Kellamergh Park on Saturday 16th July Kick Off 3pm.