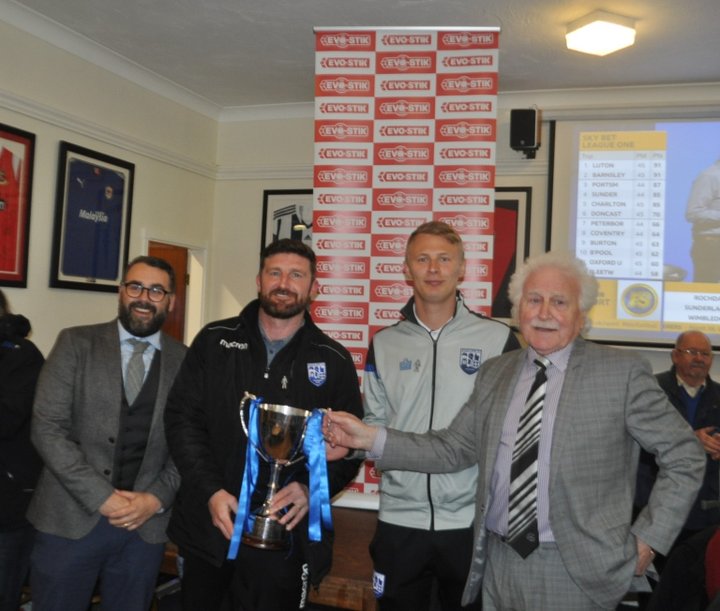 Radcliffe suffered a potentially damaging defeat on a day when they were presented with the trophy for finishing runners-up in the West Division.

They went down 2-0 at Chasetown which has an albeit small effect on their points per game, the figure that will determine which five of the seven play-off winners across the step four leagues will be promoted.

There was a late change to their play-off opponents too, Daniel Trickett-Smith’s last minute winner for Leek Town at Colwyn Bay ensured a home tie for them in the play-offs, knocking Colne and Ramsbottom United down a place each.

But that was only after Ramsbottom surrendered a 2-0 lead at home to Kidsgrove Athletic, Anthony Malbon’s last minute equaliser meaning they will now travel to Radcliffe rathern than Colne in the play-offs.

Colne had perhaps the least eventful final day of the play-off sides, winning 2-1 at Skelmersdale United, who are relegated from the West Division.
There was heartbreak for Runcorn Linnets, who missed out on goal difference despite a 2-0 win at Glossop North End.

Linnets had been in the top five since August bank holiday, but were dislodged over the Easter weekend and miss out.

Elsewhere, there was late drama at Droylsden, who thought they’d rescued a point when Sefton Gonzales struck his second goal in injury-time, only for Lloyd Dean to fire an even later winner for Prescot in a 3-2 win.

Champions Atherton finished on 82 points thanks to a 2-0 win at Newcastle Town, Tom Bentham scoring a brace.

Widnes completed their first season in the NPL with a 3-1 win over a reprieved Kendal Town, while Clitheroe battled out a 1-1 draw with Mossley.

Play-off line-ups confirmed  The EVO-STIK League enters the play-offs following the completion of the regular season over the weekend.