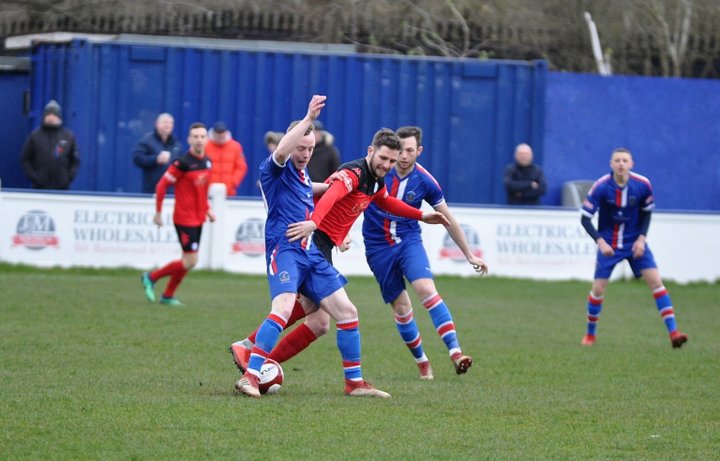 There were just two games played in the EVO-STIK League West Division at the weekend due to the weather.

With everyone else falling foul of waterlogged pitches, only the games at Chasetown and Widnes, on their artificial surface, went ahead.

Chasetown and Ramsbottom United battled out a 2-2 draw for the second time this season, having drawn by the same scoreline in Chris Willcock's first game in charge of Rammy back in October.

The Rams were reduced to 10 men early on when Ryan Ellison saw red for an incident with Callum Cockerill-Mollet.

They fell behind midway through the first half when a slip by 'keeper Sam Ashton in dealing with a back pass allowed Tom Hill to nip in and shoot in to the empty net, which put the Rams behind for the first time in an away league game since October.

But they were back on terms by the break, Jamie Rainford continuing his fine goalscoring form to equalise four minutes from half time with his 13th goal in as many games.

Ramsbottom would take the lead around the hour mark, Nic Evangelinos scoring from the penalty spot after Iyrwah Gooden was brought down in the box, but they couldn't hold on for the win.

With less than two minutes left, James Askey drove home a late equaliser and the Rams had to settle for a draw as they stretched their unbeaten away run to 12 in the league.

In the only other game, Widnes made it three games unbeaten with a 4-1 win over basement boys Skelmersdale United.

An early own goal and Jay Roberts had the hosts 2-0 up by half time, and they added two further goals through Niall Watson and another own goal before Jordan Tyrer scored an injury time consolation.