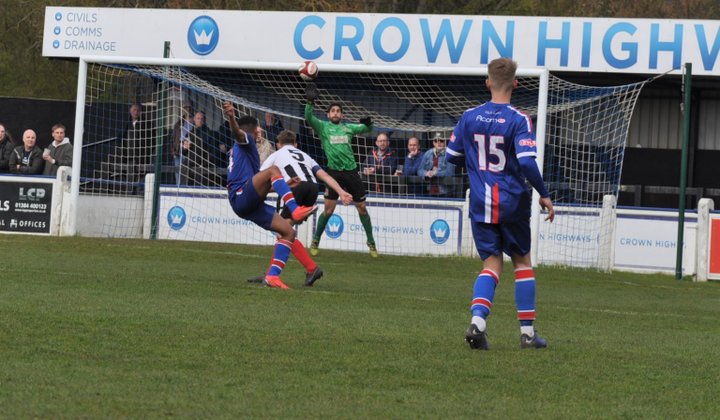 Radcliffe made it seven wins and five clean sheets in a row to maintain their spot at the top of the EVO-STIK League West Division.

Tunde Owolabi was the match winner once again as they won 1-0 over Kidsgrove Athletic to maintain their two point lead over Atherton Collieries, who play their game in hand on Monday night.

Colls had to come from behind at Widnes to stay in touch, Jordan Cover and Connor Hughes scoring within seven second half minutes of each other after George Webster had given Widnes a 12th minute lead.

It may well now be a two horse race for the title, despite Ramsbottom United’s 4-0 win over Droylsden.

Nic Evangelinos scored all four goals for Rammy, who are two points behind Colls having played two games more.

Two points further back are Runcorn Linnets, who were 2-1 winners at Newcastle Town.
Anthony Hickey scored his first goal of the season to give Linnets the lead on 54 minutes, though it was cancelled out four minutes later through Chris Smith.

Not for the first time this season, Freddie Potter popped up to win the game late on, scoring five minutes from time.

There’s a scrap brewing for the final spot in the play-offs, and Linnets and Ramsbottom may yet get sucked in to that.

Currently coming out on top are Leek Town, who pulled off a crucial win over previous fifth-placed side Mossley.

They won 3-1 thanks to goals through William Reeves, Niall Maguire and Jack Sanders.

Colne now sit between those two, and also have a game in hand, after they won 5-2 away at Colwyn Bay.

A remarkable three goals in three second half minutes ensured the result went Colne’s way, after they had led 2-1 at half time. Oliver Wood’s second goal of the game was quickly followed by a Matthew Morgan strike and Will Bell own goal, before Ashley Woods’ second goal for Colwyn Bay shortly before the hour.

Prescot Cables are still in the hunt too, they were 2-1 winners at Clitheroe, James McCulloch scoring the winner after George West had cancelled out Lloyd Dean’s opener for the visitors.

Trafford may also have eyes on sneaking in to the top five after their 2-0 win at home to Glossop North End.

At the bottom, Kendal Town still aren’t safe and they were hammered 5-0 at Chasetown, with Thomas Hill scoring twice.

Skelmersdale United are six points behind them, but with a game in hand, and they drew 1-1 at home to Market Drayton Town on Saturday, with Henoc Mukendi scoring their goal.

Cup Final: "It's what we play for, to win things"  Farsley Celtic defender Jack Higgins is looking forward to the chance to win a trophy when they face Trafford in next week's Integro League Cup Final.