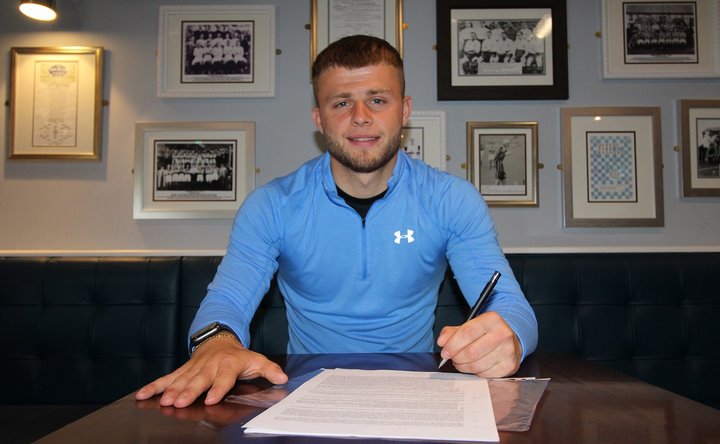 Sam Hodgson has committed his long-term future to South Shields after putting pen to paper on a new contract.

The striker has signed a two-year deal, with the option for a third, after enjoying a breakthrough season in 2021-22.

The campaign saw the 20-year-old score his first senior goal for the Mariners and he went on to score eight further times as he firmly established himself as an important member of the squad.

It continued Hodgson’s excellent progress since joining the club’s Academy in 2018, and left him in no doubt that his future lay at 1st Cloud Arena.

Hodgson said: “Every player wants their future sorted nice and early in the summer and I’m delighted to know I’m going to be at this club for another few years at least.

“I’ve been here for four years and know what the club is all about and where it wants to go, which matches my own ambition.

“Last season was a big breakthrough on a personal note and I was quite satisfied with it, although not completely.

“Every player, including myself, will feel that they could have done more to help us achieve our goal of promotion.

“The hangover from the loss in the play-offs lasted for a few days, because ultimately we failed in what we set out to do and it hurt.

“Now it’s about getting refreshed and ensuring we are raring to go to right the wrongs of last season to get the club where it wants to be.”

Hodgson and his team-mates will return for pre-season training in late-June before kicking off their games programme with a trip to Berwick Rangers on Saturday, July 9th.

South Shields manager Kevin Phillips added: "The club and myself are absolutely delighted that Sam has agreed to sign a new deal to help us on our journey over the next few years.

"Sam came through our Academy and did a fantastic job last season, when he really demonstrated the quality he has.

"The club is looking to strive and progress in the years ahead so it's very important we keep the young and talented players we have, and continue to develop them.

"Sam still has a lot of learning and developing to do but that excites us and we certainly view him as a key player for the future.

"We wish Sam the very best for the next few years ahead."