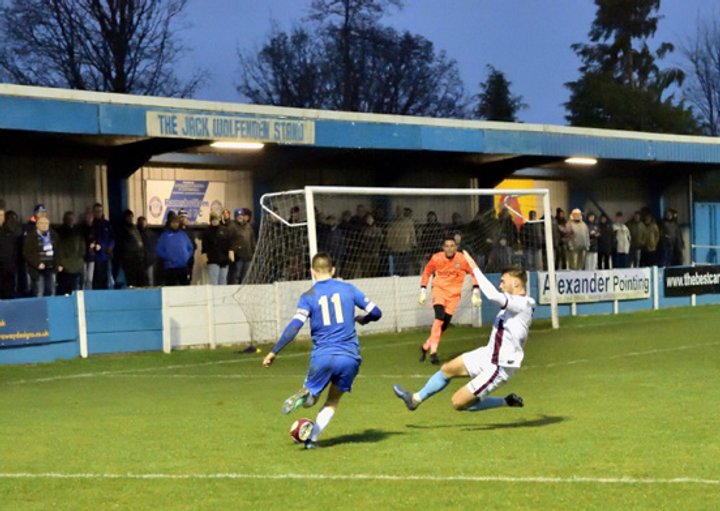 Ramsbottom United are the last club standing and they stayed alive thanks to a 2-2 draw at home to Weymouth, and they will now make the long journey south for a replay on Tuesday night.

On-loan Mansfield striker Iyrwah Gooden was the hero, scoring deep in to injury time to send the Rams in to the third round draw for the first time in the club’s history.

Having had a host of chances before that, the Rams came out fighting in the second half and they eventually got their reward on 68 minutes, Nic Evangelinos turning in Tom Kennedy’s pull back.

Weymouth thought they had pinched it through Calvin Brooks, before Gooden’s late show.
At the close of play, manager Chris Willcock was again proud of his sides efforts, yet was wary of the fact Ramsbottom could have won it with the chances created.

He said: “I’ve got the upmost admiration for the lads. They’ve given everything today and we live to fight another day, just. I have had some dramatic moments in my managerial career and this is another one.

“We’ve trained Tuesday and Thursday this week and for large periods the lads have implemented our game plan well.”

The replay on Tuesday at Weymouth may cause a few problems regarding travel and work arrangements.

Willcock added: “I think all the management team will be able to supplement the bench!

“We’re more than looking forward to going back to Weymouth. Going there can only inspire you from a playing prospective.

“There are some big teams left in the draw at the moment but we will see what Tuesday brings. These last four games for Rammy have been huge and the fans have been tremendous every time.”

 Fylde await if Ramsbottom get through AFC Fylde await Ramsbottom United in the last 16 of the FA Trophy if they can successfully navigate Tuesday's replay at Weymouth.