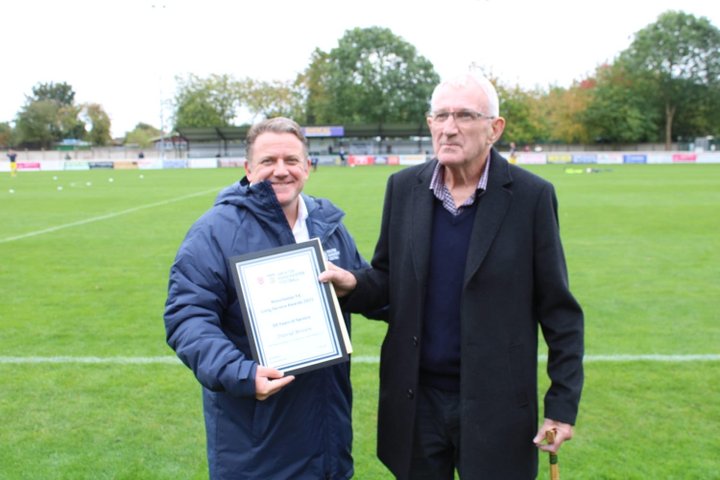 Trafford FC President David Brown has been presented with a 50 Years’ Service Award by the Football Association for his amazing contribution to non-league football.

David began his journey in grassroots football back in the early 1970s with Old Urmstonians in the Lancashire and Cheshire League both as a player and member of the committee.

He then moved to Flixton Football Club in 1985 before becoming a founder member of Trafford Football Club, formerly known as North Trafford, in 1990.

Initially, David was Vice-Chairman and Football Secretary at the Urmston based club but he then became Chairman and was a driving force in the club’s development of their Shawe View ground and their subsequent meteoric rise up the non-league pyramid.

In 2000 David moved house to the North Lancashire area and relinquished his Chairman’s position but still made the journey down to Urmston several times each week.

And for his magnificent contribution towards the development of the club he was made President.

The photograph above shows David receiving his 50 Year Service Award from John McLellan-Grant, Chairman of the Manchester Football Association.

 Clitheroe Lads United Clitheroe FC’s Lads United initiative is providing ‘a real boost’ to the physical and mental wellbeing of its participants, according to vice-chairman Andrew Jackson.

Radcliffe invite applicants for manager's role  Radcliffe have started the search for a new manager.