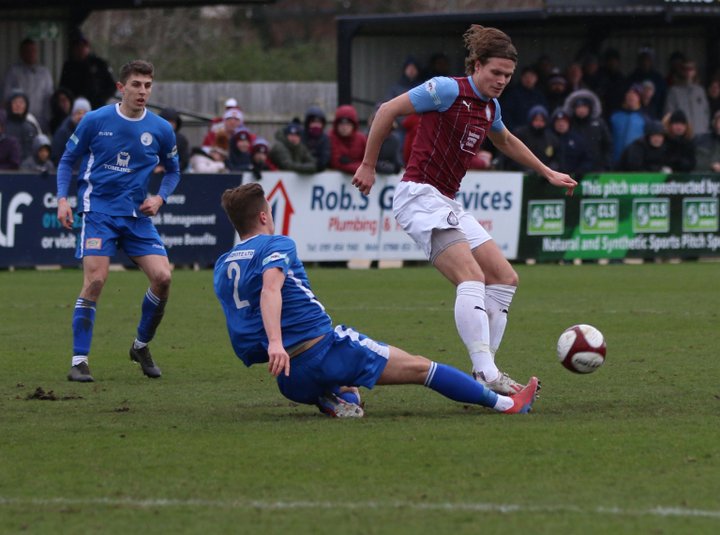 Just four games went ahead in the BetVictor Northern Premier League over the weekend, with South Shields extending their lead to 12 at the top of the table.

It was first versus second as the Mariners played hosts to FC United of Manchester, and despite a hat-trick from Tunde Owolabi, it was the hosts who claimed a 5-3 victory in front of an impressive crowd of 3,274.

Jason Gilchrist bagged two on the day, with three goals in three games now for the 25-year-old, as well as teammates Joshua Gillies, Nathan Lowe and Bali Mumba.

“When you come to an occasion like this with a little bit of pressure, to put on a 45 minutes like that, I honestly thought if we came in at 6-0 up it wouldn’t have been harsh.

“I thought we were magnificent, possibly could have turned two, three or four situations into better but the game plan worked a treat.

“Second half was obviously entertaining probably for the neutral but not for us.

“It was difficult. They obviously have a magnificent player at the top end of their pitch who is scoring a load of goals and he’s a handful.

“We were dealing with him pretty well when we had our back-line in place, once we had to shift bodies around and had a few injuries and had a back four pretty much made up of central midfield players plus Craig Baxter on the opposite side, good players will exploit that and he did so fair play to him. But I think we have to focus on the magnificent stuff in the first half.”

Lancaster City remain in fifth spot following their 1-1 draw against Witton Albion at the Giant Axe. Paul Dawson gave the hosts a 1-0 lead just before the break, but James Foley equalised on 72 minutes and that was enough for a share of the spoils.

Scarborough Athletic are pushing towards a play-off spot following their 1-0 victory over Basford United, James Walshaw scoring his 26th goal of the campaign.

Radcliffe claimed a point at home for the second consecutive week, with a 2-2 draw against Whitby Town. The hosts took a 2-0 lead into the break, thanks to goals from Kole Hall and Joseph Cummings in the last five minutes of the half. However, goals from Jassem Sukar and a penalty from Paul Blackett saw the sides both take a point.

Radcliffe sit 16th in the league table, while Whitby are just three points behind the play-offs in seventh spot.

 S/East round-up: Wisbech back to bottom Following the clash of the bottom two, Wisbech Town now sit at the bottom of the BetVictor S/East table.