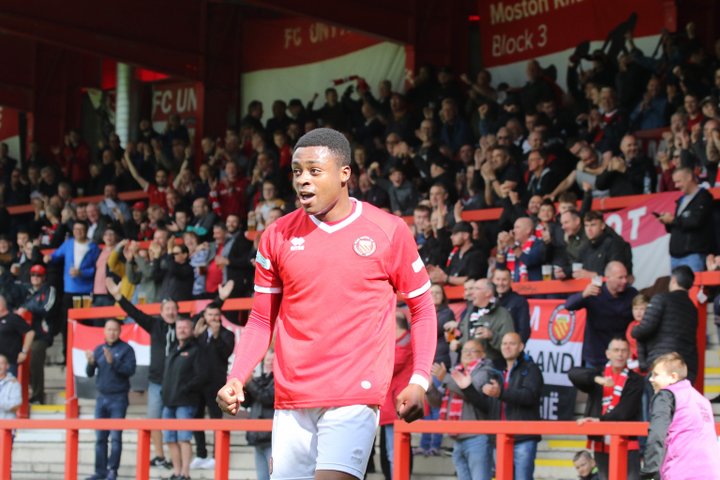 The Reds led 5-0 after just half an hour as the Bucks collapsed, just days after they had won 7-0 themselves against Grantham Town, their first win of the season.

Jordan Buckley, Alex Curran and Paul Ennis also scored to send the Bucks back to the bottom of the table.

The chasing pack missed out on the chance to close the gap on leaders South Shields, who lost 3-1 at Witton Albion.
Daniel McKenna’s penalty gave Witton a first half lead, only for Robert Briggs to equalise on 62 minutes.

Within a minute, Will Jones had equalised and then four minutes later Connor Heath gave the hosts breathing space.
Shields’ lead at the top remains at 10 points after closest rivals Mickleover Sports were beaten 3-1 at Matlock Town.

Lee Hughes’ fifth goal in as many games wasn’t enough for Sports, as the Gladiators won thanks to goals from Dan Bramall, Luke Hinsley and Sam Scrivens.

Lancaster City are up to third after a 3-0 win over struggling Ashton United.
David Norris continued his fine goalscoring form with a brace, either side of Robert Wilson’s penalty.

Basford United are second after James Reid’s penalty earned them a point at Morpeth Town, who had taken the lead through Ben Harmison on the stroke of half time.

Radcliffe registered their third win of the season, Ollie Martin’s penalty save from James Lawrie proving the catalyst for a smash and grab raid, Kingsley Williams’ strike 10 minutes from time enough to beat Nantwich Town 1-0 at the Weaver Stadium.
Warrington Town also won by a solitary goal, substitute Tony Gray scrambling home with 12 minutes to go as they beat Whitby Town 1-0 to leapfrog the Seasiders in the table.

Gainsborough’s struggles continued as they were beaten 2-0 at home by Atherton Collieries, while Craig Westcarr’s 89th minute strike rescued a point for Grantham Town at home to Hyde United.

Luis Morrison and Paddy Lane scored twice within four second half minutes to turn the game in favour of Hyde after Westcarr’s first half opener, only for the striker’s second to level it up at 2-2.

Stalybridge Celtic beat Bamber Bridge by the odd goal in five in a see-saw battle at Bower Fold, that saw the lead change hands three times either side of Alistair Waddecar’s brace.

Elsewhere, Scarborough made it six draws from six games at home as they were held 1-1 by Stafford Rangers.

Michael Coulson gave the Seadogs a 23rd minute lead, but Bradley Grayson marked his Stafford debut with a second half equaliser.