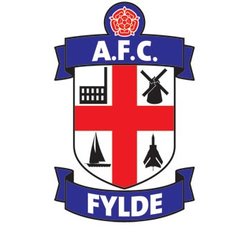 Kirkham & Wesham FC can trace their roots back to the early 1900s, but it was an amalgamation between Wesham FC and Kirkham Town in the late 1980s that really set the club on the path to its present stature, and silverware winning days.

Having won six West Lancs League titles in seven years the club purchased land behind the Birley Arms public house and hotel in Kellamergh, a district of Warton some 3.8 miles from their previous local council owned home in Coronation Road, Kirkham in 2005 and began to develop the facilities which would enable them to move up the football pyramid. Facilities at the newly named Kellamergh Park were completed at the end of the 2006-07 season and the club were admitted into the North West Counties League. With more than £150,000 having been invested into their new facilities at their idyllic location, Kirkham & Wesham were keen to carry on where they left off in the West Lancashire League.

During the summer of 2007 the club changed its club colours from all blue to all white and in our first season in the League won promotion in May 2008 to the new Vodkat Premier Division. In addition to promotion the club also won the League Cup and after a magnificent 11 match run in the FA Vase they won at Wembley in a thrilling 2-1 win beating Lowestoft Town in the final. Young Matt Walwyn has the hero coming off the bench at 1-0 down with ten minutes left and scoring both goals to finish a fantastic season for the club. This game went down in history as this was the last game as Kirkham and Wesham Football Club. Earlier last season the club took steps to secure their long term future by asking the authorities to sanction a change of name for the club to AFC Fylde in time for the 2008-09 campaign. The aim of the name change was to broaden the club’s appeal in the area and ambition to climb the football pyramid – The Football Team of the Fylde Coast the Club’s motto with a long term aim of reaching the football league by 2022.

Mick Fuller the club’s long serving manager managed to keep the nucleus of his squad from the West Lancashire League days with several new additions came on board in the close season of 2008 which gave AFC Fylde’s squad the strength in depth required to mount an assault on promotion to the Unibond League.

The club has had another monumental season, despite being knocked out of the FA Vase by Needham Market in 4th Round replay. They passed the Ground Grading on 31st March 09 achieving Grade E Status after spending over £125,000 on improvements and built on last season’s cup success with another promotion bid which went all the way to the last day of the campaign. On May 9th 2009 AFC Fylde clinched the Vodkat Premier Division Championship with a 5-0 win over New Mills, who were 3 points clear going into the final game. In front of a club record crowd of 1217 they didn’t disappoint and they won the title on goal difference.

AFC Fylde moved into their highest league position of all time when they played in the Unibond League North for the first time in 2009-10 Season the aim was consolidation. After an indifferent start to life in Step 4 long serving boss Mick Fuller was moved upstairs in Dec 2009 and former Preston North End and Barnsley Coach Kelham O'Hanlon was installed as the club's new manager. O'Hanlon had to get to grips with the rigours of what proved to be a very competitive league and gave a number of young players an opportunity to impress. After a good run at the end of the season a comfortable mid table finish was seen as progress.

In readiness for the 2010-2011 Season AFC Fylde Fylde Boss Kelham O'Hanlon assembled a squad looking to challenge for promotion in the new look Evostik North League adding some much needed quality and experience and they had a a great season winning the Lancashire FA Co-operative Trophy at the Reebok Stadium and reaching the Evostik North Play Off Final losing 2-0 to rivals Chorley to win a place in the Premier Division.

The 2011-2012 Season AFC Fylde made their intentions clear wanting promotion to the Premier Division after going so close the previous season. They started the season well but in results went against them and in October 2011 Manager Kelham O'Hanlon left the club by mutual consent.