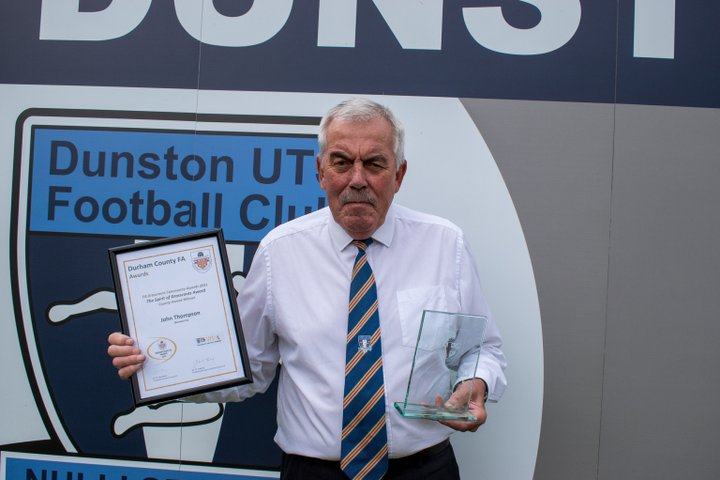 Long-serving Dunston legend, a former player, manager and chairman of the club, John Thompson has won The Spirit of Grassroots Award for 2021.

Thompson led the club to 11 trophies on the pitch and then held the role as club chairman from 1985 to 1995, overseeing the club’s rise to the Northern League to help put the club on the non-league footballing map.

He was presented with his award recognising his achievements by the Durham FA ahead of the 6-0 win over Frickley Athletic at the weekend, with a further presentation planned at half time during the game against Lincoln United on November 6.

A club spokesperson said: “It was John, along with a group of workmates at HMRC, who had the vision and unyielding tenacity to bring a successful Northern League Club to Dunston some 46 years ago.

“To look at how the club has grown and progressed over those years, and to consider what John has given to his local community is nothing short of outstanding.

“To this day he continues to work tirelessly and he epitomises everything the club is about. He will forever rightly hold legendary status at Dunston FC and in the wider local football community.

“From everyone associated with Dunston FC we would like to congratulate John Thompson on his prestigious award. It is thoroughly well deserved.”