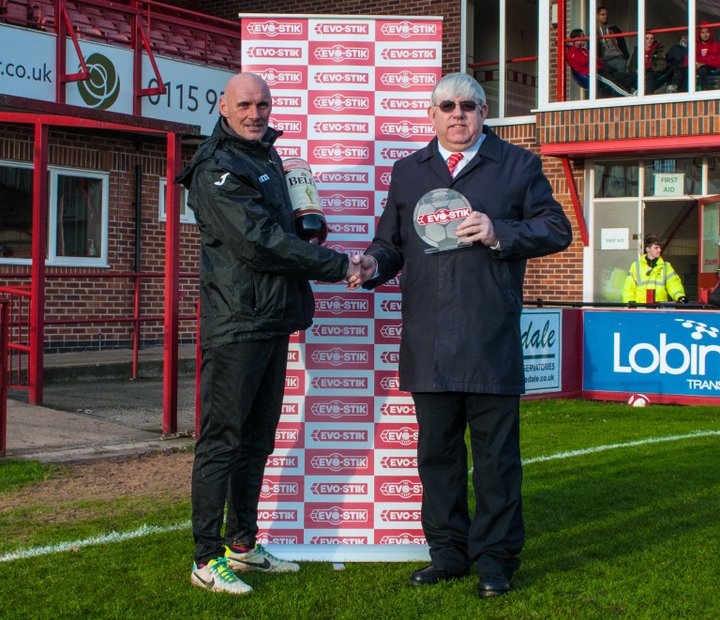 After being confirmed as Ilkeston FC's new manager within weeks of taking over as interim manager, Andy Watson hasn't taken much longer to collect his side's first EVO-STIK Northern Premier League Club of the Month accolade.

Named alongside Northwich Victoria and Shaw Lane Aquaforce as October's winners of the monthly awards, the Robins were undefeated before and after the permanent appointment of the former Rangers, Hibernian and the Scotland assistant manager in the middle of the month as the successor to Gavin Strachan with six wins and two draws, four of the victories coming after his confirmation.

The club's run also included an impressive away win in their final outing of the month, a 1-0 victory at EVO-STIK League Southern Cambridge City in the FA Trophy.

With the Robins among a pack of clubs currently chasing a play-off spot in the Premier Division, his side's form has hardly dipped since and Watson is pictured collecting the club's reward - an inscribed glass trophy and a 4.5 litre bottle of Bells Whiskey - from EVO-STIK NPL representative John Goddard before his side's 3-1 win over Hyde United at the New Manor Ground.

Handed out every month, the awards are sponsored by Bostik Ltd, parent company of the Northern Premier League's title sponsors EVO-STIK, to recognise and reward the top performers in the league's three divisions.

Northwich Victoria were presented with the First Division North's accolade within hours of being named at the start of November when they hosted Stocksbridge Park Steels in the FA Trophy's First Qualifying Round at Wincham Park.