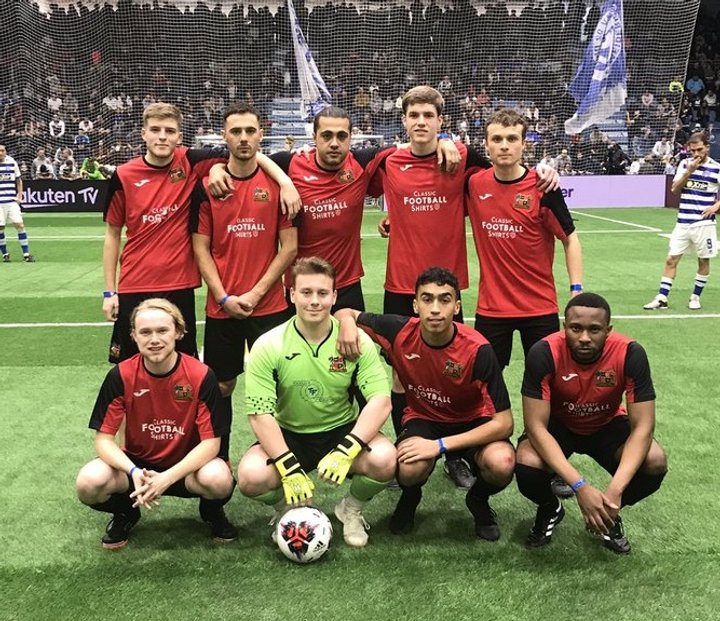 Sheffield FC played a part in the sixth edition of what is generally considered to be Germany's most successful indoor soccer tournament last Sunday, when they were invited to compete in the Schauinsland Reisen Cup in Gummersbach.

The World's First sent a young squad to the competition, with a ten man party made up of SFC Futsal players, along with members of the Sheffield FC Development and Scholarship programmes.

Whilst football and entertainment were at the fore in this glitzy occasion, the main reason was to raise money for the Lukas Podolski Foundation, and it proved to be a successful fundraiser with the ex-Germany international handing over a massive cheque for €100,000.

On the field Club faced up against the competing teams of Arminia Bielefeld, SC Paderborn, MSV Duisburg, Fortuna Köln and 1.FC Kaan-Marienborn, in front of a sold out Schwalbe Arena in Gummersbach.

Despite losing both of their games, the young Clubbies made plenty of friends with a brave performance, and earned a new legion of fans along the way.

Sadly, it was an incident in the first game that saw Sheffield make the headlines for all the wrong reasons in the first game against SC Paderborn, when losing 3-2 young Sam Morley was on the receiving end of what the German national press are calling a "horror-foul".

The youngster was chasing down a stray backpass, only to have the Paderborn keeper Leopold Zingerle slide out foot raised at a dangerous height, hitting Sam on the shin and breaking his leg.

It was a scene that was to be played over and over in the German media, with the game shown live on Sky Sports, and one to make the toughest of constitutions wince in empathy.

Club went on to lose the game 4-3, and followed this up with a heavy 10-2 defeat against pre-tournament favourites MSV Duisburg, thus being eliminated.

The tournament was eventually won by Arminia Bielefeld, who beat Duisburg in a penalty shoot out, winning 6-5 after finishing level in normal time.

Overall it was a great ambassadorial trip for Sheffield FC, despite being soured by Sam's injury, and yet another addition to the catalogue of pioneering events in SFC's long and illustrious history.

The latest on Sam Morley is that he is still in Gummersbach Hospital, recovering from the surgery on his right leg, accompanied by his father Peter who made the trip from the UK.

 Grantham to launch women's team Grantham Town have announced their intention to field a Women's side for the 2019/20 season.

Fylde await if Ramsbottom get through  AFC Fylde await Ramsbottom United in the last 16 of the FA Trophy if they can successfully navigate Tuesday's replay at Weymouth.