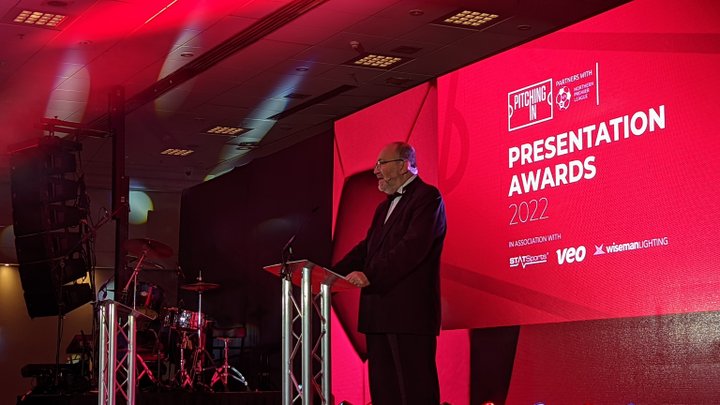 The Northern Premier League celebrated the 2021/22 season at its awards dinner in Birmingham over the weekend.

Around 400 guests, including club officials, players, managers, sponsors and friends of the NPL, were entertained by Flash! A tribute to Queen, either side of a three-course meal and the presentation of awards hosted by league chairman Mark Harris.

As well as the individual player awards, the champions and play-off winners of the four NPL divisions were all celebrated on stage.

It was the first such event to have been held for three years due to COVID and the first since the expansion of the NPL to four divisions.

Having outgrown the previous home of the end of the season awards in Blackpool, this year’s event was staged at Hilton Metropole Birmingham and the plan is to move the event around the NPL’s patch each year.

The event was sponsored by STATSports, Veo and Wiseman Lighting, with representatives from all three sponsors presenting awards on the night. Awards were also presented by various NPL directors and members of the League Management Committee, including General Manager Angie Firth.

The first awards of the night were presented to the top goal scorers from the four divisions - who scored 110 league goals between them during the campaign.

We then saw the three best goals of the season, as selected by a panel of league managers drawn from each division.

Gaz Peet of Atherton Collieries and Cieron Keane of Gainsborough Trinity finished runner-up to eventual winner Josh Mansell, whose right-foot volley from the angle for Coleshill Town against Loughborough Dynamo was crowned the 2021/22 Goal of the Season - his award was collected by Coleshill boss Cameron Stewart.

After the respective Player of the Season awards for the four divisions, there was an acknowledgement to the NPL Team of the Year and divisional Team of the Year selections - voted for by clubs’ media teams and by the fans. More than 450 nominations were received, with 175,000 votes being cast.

Next up, presented by Veo, was the NPL Rising Star award for the young player who has made the biggest impact over the season. Ilkeston’s Zak Goodson beat off competition from Kane Drummond of Warrington Rylands and Matlock Town’s Reece Kendall to win the award.

The Club of the Year award is decided by a panel of league officers and is based on the club’s quality of administration, sponsor compliance and generally going the extra mile. Stamford were the winners, ahead of Carlton Town and Warrington Town, and chairman David Whitby was on hand to receive the award.

There were acknowledgements for the lifeblood of non-league, with awards for Fan of the Year and Volunteer of the Year scooped to much acclaim by Workington’s Gordon McAllister and Alan Field of Liversedge respectively.

And finally, rounding off the presentation part of the evening, the champions and play-off winners of each division were celebrated. Entain’s Cheryl Davies was on hand to present commemorative trophies to all eight clubs, including a permanent one each for the league winners and of course the four main division trophies.

Fan of the Year sponsored by StatSports
Gordon McAllister (Workington)

Club of the Year
Stamford AFC

Volunteer of the Year sponsored by StatSports
Alan Field (Liversedge)

During the evening, people in attendance and following the awards via social media were able to interact via the #NPLAwards2022 hashtag, which saw more than 750,000 views to the Twitter wall. Coverage of the build-up, including the Team of the Year announcements, hit more than 1.4m.

After the awards, Flash! A tribute to Queen returned to the stage for a terrific set that was well enjoyed by those in attendance, before the catching up between friends and colleagues across the NPL continued long in to the night.

Earlier in the day, the Hilton Metropole Birmingham had hosted the NPL AGM and sponsors showcase, where 14 partners of the NPL networked with not only the 81 clubs from the 2021/22 season, but the new clubs joining the NPL for 2022/23.

We say farewell to our NPL champions Buxton and their fellow promoted side Scarborough Athletic as they move on to the National League North.

The chairman of the Isthmian League, Nick Robinson, was on hand to provide a response for the guests, while NPL vice chairman Keith Brown announced the loyal toast, together with thanks to sponsors and congratulations to winners.

The Northern Premier League would like to thank all its member clubs for their involvement over the weekend, as well as the league directors and officers, sponsors, partners and the host venue, Hilton Metropole Birmingham.

Ashton United continue recruitment drive  Ashton United have further bolstered their options ahead of the 2022/23 Pitching In Northern Premier League season with the signing of right-back James Baillie.