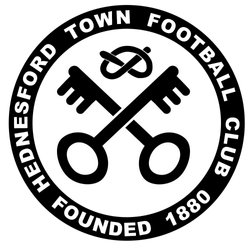 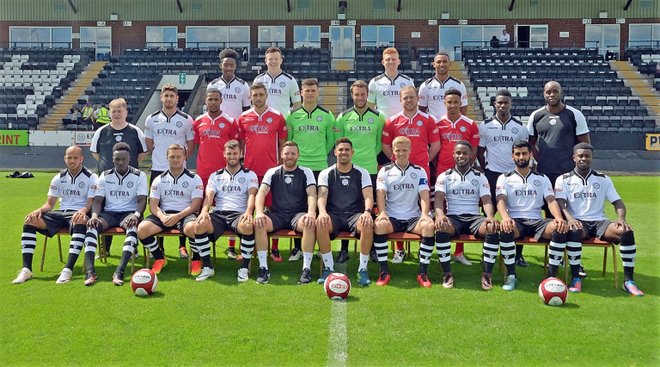 Hednesford Town boss Rob Smith and his number two Larry Chambers will be guiding the Pitmen again next season when they switch from the Northern Premier League to the new Midlands Division.

EVO-SIK League Hednesford Town have launched a new partnership to become one of the most comprehensive youth football providers in Staffordshire.

Hednesford Town manager Rob Smith moved swiftly to bring in Charlie Gatter on a loan deal from Gainsborough Trinity on Friday to replace Alex Melbourne after he left the EVO-STIK League's Pitmen.

EVO-STIK League Hednesford Town are looking forward to welcoming their groundsman David Bates back to Keys Park after he undergoes major surgery next week.

Popular former manager Rob Smith and his number two Larry Chambers are back at the helm of EVO-STIK League Hednesford Town.

The Pitmen were formed in 1880 with the amalgamation of two teams, the Red and Whites (who were also known as West Hill) and Hill Top. The newly formed club played their games at ‘The Tins’, which was at the rear of The Anglesey Hotel in Hednesford and remained there until 1904, when they moved to ‘The Cross Keys’.

‘The Cross Keys’ was home to the Pitmen until the 1994-95 season when the club moved to the new purpose-built ‘Keys Park’ stadium, which has a 6039 capacity and currently holds a Football Association Grade B ground grading certificate.

Hednesford Town FC may have a long and proud history but it was not until January 1990 that the club’s fortunes turned for the better. The 1989-90 season had been a struggle and, at the beginning of the year, the club were in a deep relegation battle and, with gates below 300, relegation from The Beazer Homes Midland Division looked a distinct possibility. In an effort to avoid relegation the club appointed former goalkeeper, John Baldwin, as manager and he gradually began to turn the club around and relegation was avoided.

The following season the team finished third and then gained promotion to the Beazer Homes League Premier Division, after finishing the 1991-92 season as runners-up to Solihull Borough. In the same season the club became the first English football team to play at The Welsh National Stadium losing 1-0 to Cardiff City, in the final of the Welsh Cup.

In the first season in the Premier Division the Pitmen finished in a creditable fourth position and reached the Staffordshire Senior Cup Final losing to Stoke City over two legs. The 1993-94 season saw the club reach a cup final for the third year running, this time it was The Birmingham Senior Cup Final where at The Bescot Stadium they were beaten 3-0 by a full strength Walsall team.

The following season the club were crowned Beazer Homes League Premier Division champions with the team defeating Leek Town in front of 2776 supporters at The Cross Keys to clinch the title and promotion to the GM Vauxhall Conference. The Pitmen commenced their first season in The Conference at their new Keys Park home and in the club’s first season in the top flight of non-league football they finished in third place behind champions Stevenage Borough and Woking.

The 1996-97 season will go down as the best in the club’s history as the Pitmen reached the first round of the FA Cup for the first time in 72 years, eventually losing in the fourth round at Middlesbrough, in front of 27,500 supporters. The following season saw the club finish in seventh position and further FA Cup success was enjoyed as, in front of millions of Match of the Day viewers, the Pitmen beat Hull City 2-0 at Boothferry Park but in the second round lost to Darlington. In the 1998-99 season the club reached the first round of the FA Cup for the third season running. This time the team beat Barnet 3-1 in the first round but lost by the same scoreline away at Cardiff City in the next round.

League success did not follow the fine cup runs and the 1999-2000 season saw the team drop to 17th position then, after John Baldwin had stepped down during December 2000, the club were relegated for the first time in their history. A succession of managers were appointed to replace John Baldwin including Neil Pointon, Colin Lambert, Paul Raynor, Kenny Hibbitt and Ian Painter.

The club’s first season back in the Southern League was a big disappointment and only a last day victory away at Newport (IOW) saved a second consecutive relegation. The team started the 2002-03 season with Ian Painter in charge but, with the Pitmen hovering around the relegation zone, Ian was replaced during February 2003 by Barry Powell, who returned to the club after a spell at Stafford Rangers. Barry had previously been assistant manager to Kenny Hibbitt.

Despite the club’s FA Trophy success in May 2004, when Canvey Island were defeated 3-2 at Villa Park, Barry Powell was replaced as manager by Chris Brindley. The club had failed during the 2003-04 season to finish high enough in the league to move into the new Conference set up but promotion came twelve months later, when a place in The Football Conference Northern Division was gained after winning play off games away at Merthyr Tydfil and Chippenham Town.

The 2005-06 season saw the Pitmen again reach the first round of the FA Cup but the team were defeated 4-0 away at Histon. The team continued to leak goals and, as a result of a number of poor results, Chris Brindley left the club by mutual consent in early December 2005. Chris’ assistant manager, former Wimbledon star, Steve Anthrobus, was appointed Manager but he was unable to save the club from relegation to The Unibond Northern Premier League.

Former Nottingham Forest player, Phil Starbuck, was appointed manager in July 2006 and, despite challenging near the top of the table for the majority of the 2006-07 season, a slump in form after Christmas saw the team eventually finish in 7th position. In the 2007-08 season, the Pitmen ended a disappointing season in 8th position and Phil Starbuck was replaced during the summer by Dean Edwards who appointed former Scottish international, Matt Elliott, as his assistant manager.

The 2008-09 season saw the Pitmen in commanding form for the first half of the season once again, but a loss of form in the New Year saw the title challenge fade away, with the team finishing in a disappointing 8th place. One consolation was that the side went on to win the Birmingham Senior Challenge Cup for only a second time after a wait of 73 years, beating Stourbridge 2-0 in the final.

After a disappointing start to the 2009-10 campaign Dean Edwards left the club and Simon Line, formerly of Market Drayton Town FC, was appointed to the vacant team manager position. Simon brought former Kidderminster Harriers player, Delwyn Humphreys, to Keys Park as his number two. More managerial chaos followed in early January 2010 when Simon Line handed in his resignation for ‘personal reasons’ and this resulted in the appointment of former Pitman and Northern Ireland star, Bernard McNally into the Keys Park management hot seat.

Delwyn Humphreys agreed to stay on as Bernie’s assistant manager, after a short spell as caretaker manager, following Line’s departure. Under this management team the Pitmen finished the season strongly and ended in a creditable fourth place, earning a play off semi-final tie away at Chippenham Town FC, which the Pitmen lost 2-0. After a shock early exit from the 2010-11 FA Cup Bernard McNally and his then assistant Stuart Brock left the club to be replaced by the former AFC Telford United management team, Rob Smith and Larry Chambers in late September 2010.

After a very successful season finishing second in the Southern League Premier Division, winning the Southern League Cup and losing on penalties to Salisbury City FC in the play-off final, the Pitmen were moved laterally into the Evo-Stik Northern Premier League. After a satisfactory first season back in the Evo-Stik NPL, finishing in 5th place and earning a Play Off place, losing to promoted Bradford Park Avenue, Smith set about rebuilding the team for the new season, making wholesale changes.

The 2012-13 campaign was one of the best in the history of the club, with the club finishing second in the league with 93 points and then gaining promotion through the Play Offs, beating AFC Fylde and then FC United of Manchester, the Final setting a new attendance record at Keys Park of 4412. The promotion to the Conference was complemented by winning both the Birmingham and Staffordshire Senior Cups in a truly historic season.

The success story continued in 2013-14 with Smith and Chambers once more guiding the team to the play-offs, losing narrowly over two legs to Altrincham FC who were eventually promoted. The team also acquitted themselves well in the FA Cup getting to the First Round proper, losing 2-1 to Crawley Town FC and also got to the Final of the Birmingham Senior Cup, losing to Conference Premier side Tamworth FC.

The 2014-15 season was a season of consolidation for the Pitmen who were in play-off contention at Christmas but faded in the run-in, finishing in a creditable 8th place in the Conference North. Soon after the commencement of the 2015-16 season the club were rocked by the news that Smith and Chambers were leaving to take up the vacant management positions at rivals AFC Telford United. After a flurry of interest in the posts at Keys Park, former manager Bernard McNally was appointed to the manager position to be assisted by club stalwart Chris Brindley, however, after a poor run of results in which the team only picked up 8 pts in 11 league matches McNally was relieved of his duties.

In mid December 2015, former Chelsea and Leicester City star Frank Sinclair was appointed to the manager’s position, bringing in Chris Millington as his assistant, a colleague of his at Oldham Athletic FC Academy. Despite their best efforts Frank and Chris were unable to avoid relegation and left the club in April 2016. After much interest in the vacant manager role, the club appointed Liam McDonald fresh from a very successful season with Redditch United FC.

After losing Liam McDonald to Solihull Moors FC in November 2016 there followed another period of management instability with Paul Casey having three months in charge followed by his assistant manager Gary Birch. When Gary Birch resigned at the end of the 2016-17 season the club moved quickly to appoint current manager Neil Tooth who had been the preferred external candidate when the previous internal appointment had been made.